Bellingcat’s elaborate analysis proves Russia’s “troll factory” was behind fake videos released on the internet that aimed at discrediting the Ukrainian state in the Netherlands ahead of the Dutch referendum on Ukraine-EU Association Agreement. 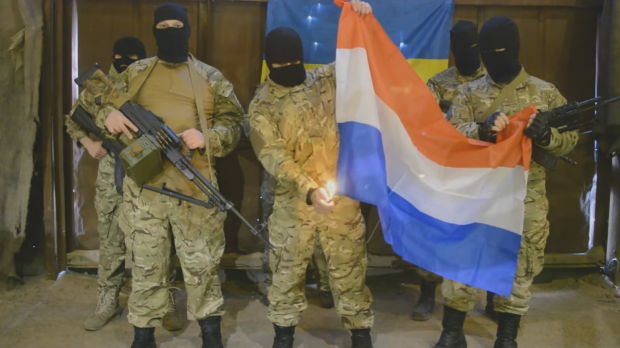 The article published by Bellingcat investigative team titled “Behind the Dutch Terror Threat Video: The St. Petersburg “Troll Factory” Connection” on April 3, 2016, examines the way in which the fake video with “Azov fighters” threatening the Dutch voters originated and was spread in January, 2016.

After open source analysis, it becomes clear that this video was initially spread and likely created by the same network of accounts and news sites that are operated by the infamous “St. Petersburg Troll Factories” of the Internet Research Agency and its sister organization, the Federal News Agency (FAN).  The same tactics can be seen in a recent report from Andrey Soshnikov of the BBC, in which he revealed that a fake video showing what was supposedly a U.S. soldier shooting a Quran was created and spread by this “troll factory.”

Read alsoNSDC confirms fake Azov regiment video product of Russian propagandaThe Azov Battalion video was not the only piece of fabricated evidence created with the Anti-Ukrainian disinformation campaign. Following the video’s spread, a screenshot was created to supposedly verify the existence of the video on the Azov Battalion’s official YouTube channel (“AZOV media”). This screenshot supposedly proves that the flag burning video truly was posted by the Azov Battalion before its deletion and upload on the “Patriot” YouTube channel. As will be described in the following section, this screenshot is a fabrication and does not indicate that the video was truly posted to the channel.

The perpetrators went as far as claiming Azov orchestrated this entire hoax in order to make Russia look bad, knowing that the video would quickly be exposed as a fake.

The investigators also note that there are usually two types of “troll” users who work in tandem to spread disinformation: supposed Ukrainians who are disgruntled, or Ukrainians who share extreme views or content that can be picked up by pro-Russian groups as examples of Ukrainian radicalism.

A clear example of this behavior can be seen in the group “Harsh Banderite.” The post on this supposedly pro-Ukrainian group show discontent for President Poroshenko and admiration for the far-right/ultra-nationalist group Right Sector. Many posts “playfully” hint at genocide and terrorism, such as blowing up the Kremlin or killing civilians in eastern Ukraine.

Read alsoKremlin propagandists spotted in anti-Ukrainian campaign in NetherlandsMany profiles in these groups, which are likely creation of pro-Russian groups or individuals, appear alongside one another on other sites. One of them, “Solomiya Yaremchuk,” appears in the comments on an article on Cassad.net, a popular pro-Kremlin blog, alongside numerous accounts with overtly Ukrainian names, such as “Zhenya Bondarenko,” “Kozak Pravdorub,” and “Fedko Khalamidnik.”

The creation and propagation of the fake Azov Battalion video was almost certainly not the work of a few lone pranksters, but instead a concerted effort with connections to the infamous Internet Research Agency, widely known as the organization based in St. Petersburg that pays young Russians to write pro-Russian/anti-Western messages in internet comment sections and blog posts.

The fake Azov Battalion video is clearly linked to the interconnected group of four users, the first two of whom were the very first people to spread the fake video online, and copied each other in their posts. The video, uploaded to a brand new YouTube channel and without any previous mentions online, would have been near impossible to find without searching for the video title. Thus, it is almost certain that the troll network is connected with the creation of this fake video, reads the report.

Read alsoBellingcat: 20 Russian soldiers involved in downing MH17For the most part, the mainstream Dutch media was not fooled by the video and its threats of terror, according to Bellingcat.