Chairman of the Verkhovna Rada, Ukraine's parliament, Andriy Parubiy says that the commitments undertaken at the Bucharest NATO Summit in 2008 should be honored and Ukraine should become a NATO member state, according to the Rada's press service. 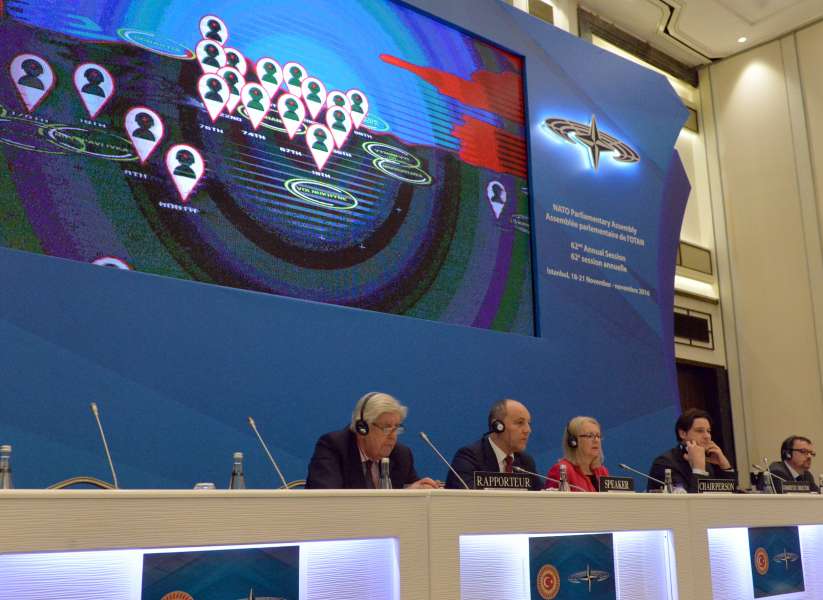 Parubiy tells NATO PA Ukraine has been repelling the offensive and aggression against the world / Photo from rada.gov.ua

"Bucharest Summit 2008 commitments are effective, and very soon our flag will be flying near the Alliance's Headquarters," he said during a NATO Parliamentary Assembly in Istanbul, Turkey, on Saturday, November 19.

Read alsoNATO PA urges united stance on Russia's aggression against Ukraine"This is our strategic goal for Ukraine, which has been defined by the Ukrainian parliament," he said.

In his words, distinctive partnership with NATO is not only an opportunity to reform the security sector, but also to change society in general.

"We'll have to conduct many reforms, simultaneously countering aggression of one of the strongest armies – that of the Russian Federation. I'm sure that by deterring Russian aggression, our soldiers have been defending not only Ukraine but the entire free world," he said.

In his words, "every dollar invested in the development of Ukraine saves thousands that would have been needed to contain the Russian Federation's belligerence on the Alliance's eastern borders."

Read alsoUkraine OSINT experts present at NATO PA evidence of Russia’s military involvement in Donbas conflict"Russian aggression is much wider than just military aggression, which is only a part of the plans Russia has against Ukraine: information and energy warfare, rocking the country – all these are aspects of the hybrid war waged by Russia in an attempt to regain control not only over Ukraine. We are firmly convinced that Ukraine is very important, but it's not the ultimate goal. Ukraine has been repelling the offensive and aggression against the world," Parubiy said.

According to him, "our struggle is global confrontation, the clash of civilization."

Parubiy said he hoped that sanctions against Russia would be maintained until the occupied areas in Donetsk and Luhansk regions and Crimea have been liberated.

"This is extremely important to us, so that we do not forget about this, about occupied Crimea, when we conduct discussions about the restoration of our sovereignty, so that all members of the Alliance remember the Bucharest summit commitments that Ukraine will join NATO," he added

Dialogue and cooperation with NATO started after the end of the Cold War, when newly independent Ukraine joined the North Atlantic Co-operation Council (1991) and the Partnership for Peace programme (1994). Relations were strengthened with the signing of the 1997 Charter on a Distinctive Partnership, which established the NATO-Ukraine Commission (NUC) to take this cooperation forward.

At the Bucharest Summit in April 2008, Allied leaders agreed that Ukraine would become a NATO member in future.

In December 2008, NUC foreign ministers agreed to enhance opportunities for assisting Ukraine in its efforts to meet membership requirements and to develop an Annual National Programme (ANP). A "Declaration to Complement the Charter on a Distinctive Partnership between NATO and Ukraine" was signed on August 21, 2009, to reflect decisions taken at the Bucharest Summit and the December foreign ministers' meeting in 2008.

Since 2014, in the wake of the Russia-Ukraine conflict, cooperation has been intensified in critical areas.

On December 29, 2014, Ukrainian President Petro Poroshenko signed into law a bill to cancel the non-bloc status of Ukraine and announced that the country would start a process to achieve the criteria needed for NATO membership and also integrate into the Euro-Atlantic security space.