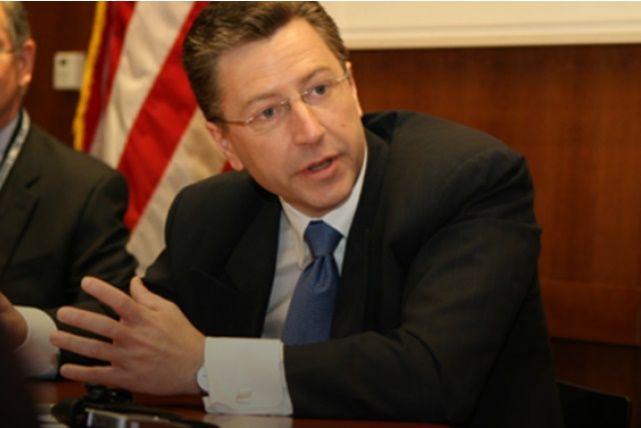 "First off, Russia is already in Ukraine, they are already heavily armed," he said in Paris on July 25 in an interview with Current Time, the Russian-language network run by RFE/RL in cooperation with Voice of America (VOA). "There are more Russian tanks in there than [tanks] in Western Europe combined. It is a large, large military presence."

Volker said he did not think arming Ukraine with lethal defensive weapons would "provoke Russia to do more than they are already doing, and it also isn't going to change any kind of balance that way."

Read alsoU.S. 'may send arms' to Ukraine, says new envoy - BBC"I hear these arguments that it's somehow provocative to Russia or that it's going to embolden Ukraine to attack. These are just flat out wrong," Volker said.

In his words, providing lethal defensive weapons would allow Kyiv to "defend itself if Russia were to take further steps against Ukrainian territory."

"Russia says it won't do that and isn't doing that, so then there should be no risk to anybody, if that's the case," he said.

President Donald Trump's administration "is now reviewing where the Obama administration left it, considering whether we should provide defensive arms to Ukraine or not," he said. "So that's the state of play."

Volker was on a tour of Ukraine on July 23-24. In particular, he visited the Ukrainian-held towns of Avdiyivka and Kramatorsk in Donbas.

If you see a spelling error on our site, select it and press Ctrl+Enter
Tags:RussiawarDonbasUSAVolkerdefensiveweapons