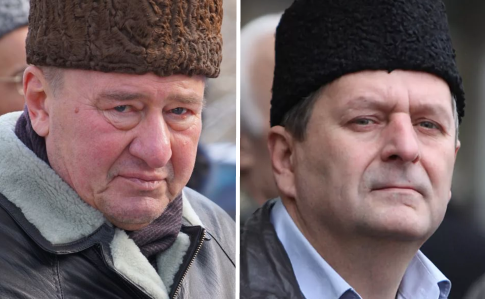 Members of the Mejlis Umerov (left) and Chiygoz (right) / Photo from pravda.com.ua

"What everyone has expected so long has just happened. Two more hostages, two Ukrainian political prisoners have been freed, Akhtem Chiygoz and Ilmi Umerov are fearless heroes of the Crimean Tatar people. Today they have been freed from criminal prosecution," he wrote on Facebook on Wednesday, October 25.

According to Polozov, the release of Chiygoz and Umerov is a natural result of titanic efforts, successfully arranged legal, political and diplomatic work.

Ukrainian President Petro Poroshenko's press secretary Svyatoslav Tsegolko confirmed on Wednesday afternoon that a plane with Chiygoz and Umerov on board had already landed in Ankara.

Crimean Tatar Mejlis Chairman Refat Chubarov, who is also Member of Parliament in Ukraine from the Petro Poroshenko Bloc parliamentary faction, says that after Turkey, the two men will travel to Ukraine.

He told UNIAN in a comment that agreements were that "they will fly to Turkey and then go to Ukraine."

Read alsoUkraine, Turkey to coordinate actions in protection of rights of Ukrainians in CrimeaIn his words, many parties were involved in talks on the release of the hostages, in particular, European politicians, including German Chancellor Angela Merkel, as well as Turkish President Recep Tayyip Erdogan and Ukrainian President Petro Poroshenko.

"I think the Russians followed that way – they considered Erdogan's request," Chubarov added.

If you see a spelling error on our site, select it and press Ctrl+Enter
Tags:RussiaCrimeaUmerovMejlisfreedomChiygoz