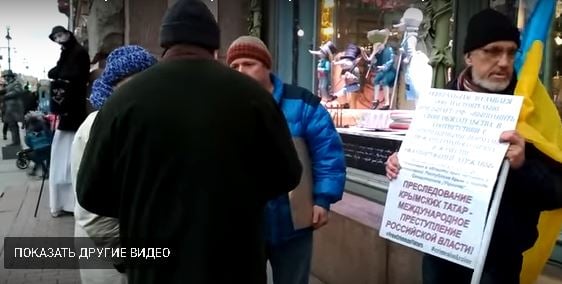 Read alsoPersecution of Crimean Tatars intensifies in occupied Crimea - HRWPart of the picketers also mentioned Ukraine. For example, one of the posters was saying: "Crimea is turning from a resort area into a military base, with the suffering of Crimean Tatars and Ukrainians."

In addition, some activists called for a boycott of the 2018 World Cup in Russia, as well as for the release of Ukrainian filmmaker Oleh Sentsov and other political prisoners of the Kremlin.

Several people approached one of the activists, demanding that he stop the protest. The police intervened in the conflict and decided not to impede the picket.

As UNIAN reported earlier, the Russian court is going to sentence Ukrainian journalist Sushchenko to 20 years' imprisonment. He was officially charged with espionage.

If you see a spelling error on our site, select it and press Ctrl+Enter
Tags:policeCrimeanTatarsMejlisSt.Petersburgpicket