Biden's pick for secretary of state: Blinken's stance on Ukraine

It is known that the nominee's grandfather immigrated to the U.S. in the early 20th century from Kyiv, now the capital of Ukraine. 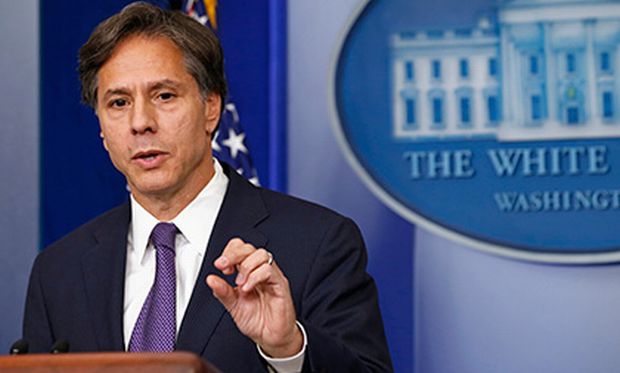 As Donald Trump accepted that a formal transition should begin for President-elect Joe Biden to take office, UNIAN has looked into Biden's nominee for the post of secretary of state to find out his views on Ukraine and Russian aggression against its neighbor.

Speaking about U.S. policy toward Moscow when he served in the Obama–Biden administration and when it came to the war in Ukraine, Blinken said that "despite repeated efforts by President Obama to try to find an off-ramp for Russia, to try to demonstrate that there could be a win-win, not a win-lose," the U.S. failed. "Obviously, we were not successful," he said, as per BuzzfeedNews.

Also, he has advocated for the U.S. to provide lethal aid to Ukraine to fight off Russia's invasion. Vox reported.

It is also known that the nominee's grandfather in the early 20th century immigrated to the U.S. from Kyiv, now the capital of Ukraine.

"I had a grandfather who came here at the turn of the last century fleeing pilgrims in what's now Ukraine, was welcome to the United States, built a life for himself, for his children, a stepmother who fled communism, literally, in the dead of night on a train, made her way, at a very young age with her mother, to the United States," Blinken told CBS News back in 2019.

Commenting on Russian aggression against Ukraine, Blinken separately noted that a number of Eastern European states joining NATO turned out to be a huge deterrent to Russia.

"I asked myself where would the Baltic states be right now if they were not in NATO? Where would Poland, Hungary, the Czech Republic be in their own ways? I think that's proved to be a tremendous deterrent to Russian aggression," said Blinken. "But states like Ukraine that are not in it, there's a reason that we got involved in leading the effort to put pressure on Russia to stop its aggression, and, we hope, actually return sovereignty to Ukraine."

Read alsoMinister Kuleba confirms nomination of Markarova as new U.S. ambassador"And it's not because on a basic level Ukraine, itself, is that critical to the United States or to countries in Europe," he added. "It's because the norms that were violated in terms of aggressing a democratic country on Russia's borders, changing its borders by force, trying to dictate to people their choices about with whom they would ally or associate, if you allow that to stand, it is an open invitation to aggression and anarchy throughout the world."

Blinken has also slammed Russia for its prominent role in the Donbas crisis and failure to fulfill Minsk Agreements.

Joe Biden has decided on his pick for secretary of State as the president-elect works to put together a team that can be confirmed by a possibly GOP-controlled Senate.

Blinken has been viewed across Washington as someone who would be highly qualified for the role, given his past tenure as the No. 2 at the State Department as well as his stints on Capitol Hill and in the Obama White House as deputy national security adviser.