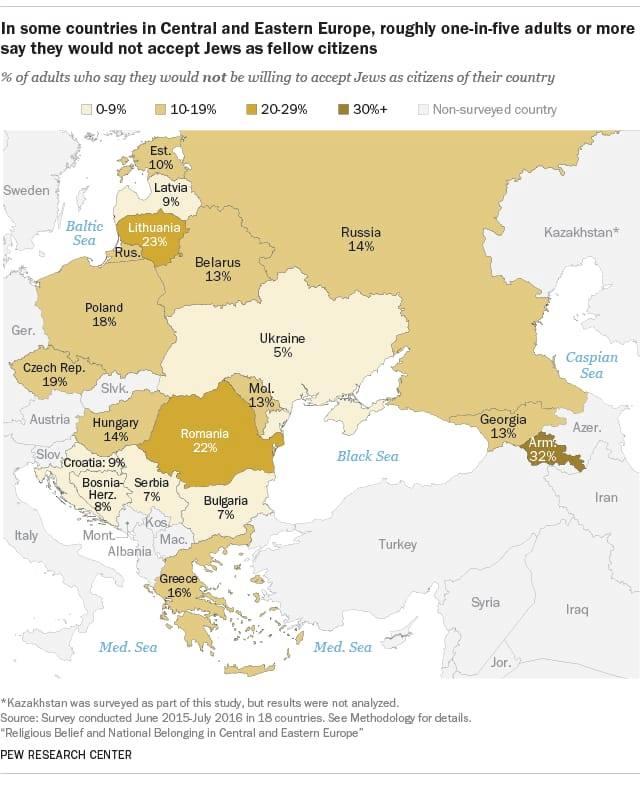 A Pew survey has found Ukrainians to be far more accepting of Jewish fellow citizens than other countries throughout the former Eastern Bloc.

These survey results directly contradict Moscow's attempts to portray Ukraine as an intolerant and xenophobic country, according to Business Ukraine magazine.

Commenting on research results showing that the intolerance rate stands at a mere 5% in Ukraine against higher figures in other countries that once had been under the Soviet influence, Deputy Minister of Information Policy of Ukraine Dmytro Zolotukhin admitted that a number of media outlets might still be eager to highlight the very fact that Ukraine is home to some anti-Semites, pulling the report out of the general context of the survey.

As UNIAN reported earlier, citing the Kyiv Post, Israel’s annual report putting Ukraine on a list of countries that saw dramatically rising anti-Semitism in 2017 generated a backlash in the country with a Jewish population of up to 100,000.

Josef Zisels, who is the chairman of the Association of Jewish Organizations and Communities of Ukraine VAAD, told the Kyiv Post on Jan 29 that the authors of the report used information from the internet and hadn’t conducted a deep enough study to make such serious accusations.