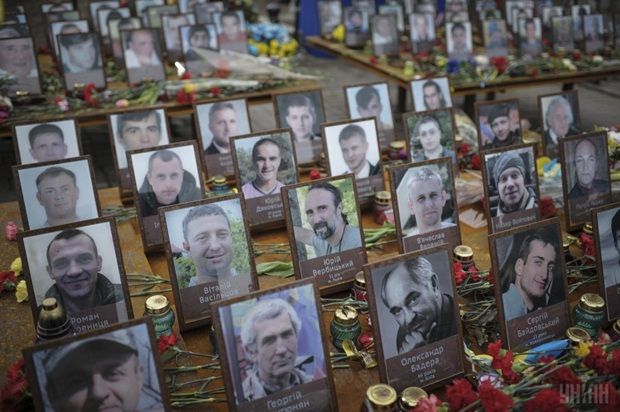 Ukrainians are commemorating Maidan events on the fifth anniversary of the Revolution of Dignity, a tragic and unforgettable page of modern Ukrainian history: on February 18, 2014, a peaceful demonstration on Kyiv's Maidan Nezalezhnosti, or Independence Square, turned into clashes with bloodshed in which people died.

Five years later, a memorial service took place along the Heavenly Hundreds Heroes Alley. Symbolic angels made of paper were put on the trees under which people were shot dead. A few dozen people came to commemorate the dead, two ministers were among them.

Participants in those tragic events remember every detail and are convinced that the sacrifice was not in vain: "This wound does not heal and it is very hard to live, but the struggle continues. We must finish those changes they started."

A service to commemorate the Heavenly Hundred Heroes also took place at St. Michael Cathedral. And a procession of memory took place on the Independence Square in the evening. Rosebuds were used to designate the places where people were killed.

People brought many rosebuds and candles there during the day. More roses will be brought in the coming days, as most of people are expected on February 20, the day when snipers shot Maidan activists on Instytutska Street.

At the same time, TV journalists from the TSN TV news service saw quite a few people, mostly young ones, who were drinking alcohol, dancing to music, laughing and having fun five years after the tragic events. They did not remember what happened five years ago and did not intend to honor the dead, the journalists said. Some of the young people tried to hide their faces from TV cameras.