The far-right activists gathered in Kyiv on March 9 to call for arrests of figures linked to an alleged military corruption scandal. 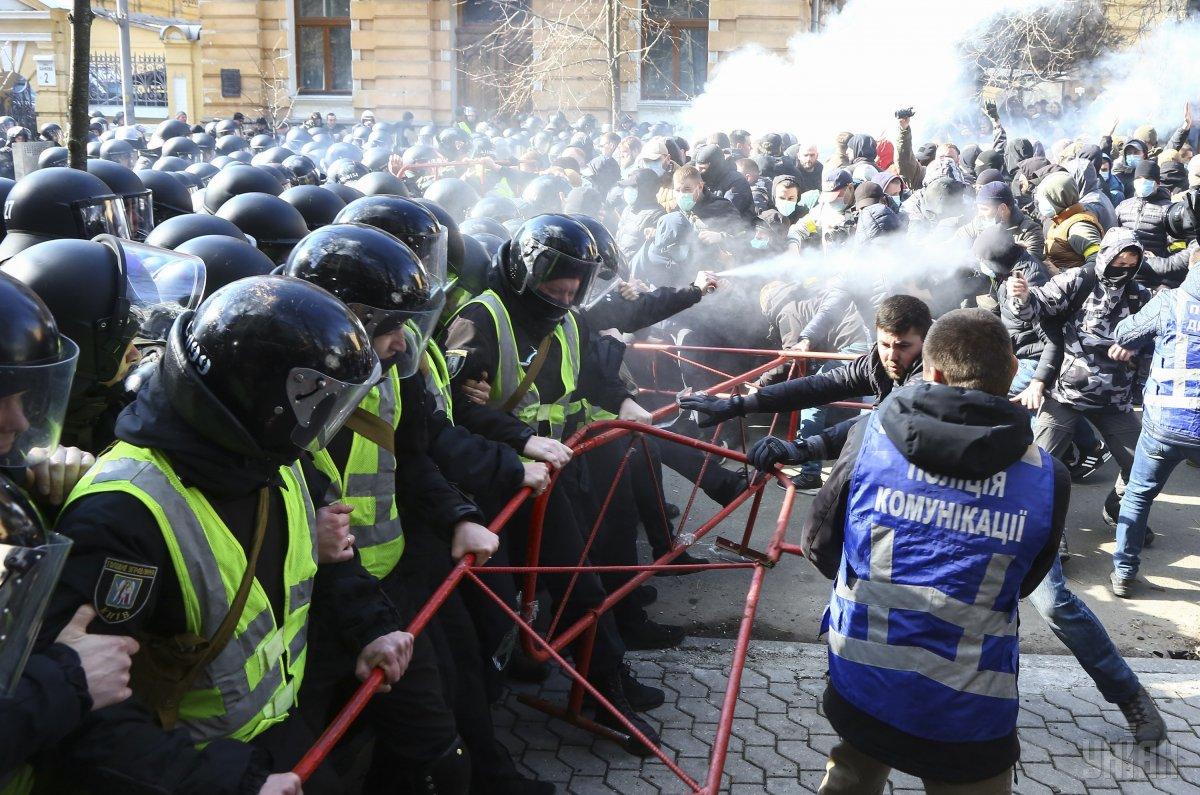 Police and far-right demonstrators clashed outside the presidential administration building in the Ukrainian capital and in at least one other city.

The far-right activists gathered in Kyiv on March 9 to call for arrests of figures linked to an alleged military corruption scandal, RFE/RL reported.

Video showed demonstrators trying to break through police lines, shoving officers and setting off fireworks. Police used tear gas to turn them back.

In a statement, police said one officer was hospitalized with chemical burns to his eyes.

Police said 15 officers were injured in clashes in the city of Cherkasy, about 150 kilometers southeast of Kyiv and the site of a campaign speech by Poroshenko for the March 31 presidential election.

The investigation on media outlet Bihus.Info's program Nashi Hroshi alleged that Ihor Hladkovskyy, the son of close Poroshenko ally Oleh Hladkovskyy, who is deputy secretary of the National Security and Defense Council, organized a ring to smuggle spare military-equipment parts from Russia in 2015, a year after Moscow seized Ukraine's Crimea region and threw its support behind militant separatists in the eastern regions of Donetsk and Luhansk.

The report alleged that state defense facilities purchased the smuggled spare parts from private companies linked to Ihor Hladkovskyy and his friends at highly inflated prices.

It claimed that Ukroboronprom, the state concern that supervises defense industry production facilities, knew the origin of the smuggled parts but agreed to buy them.

The report also alleged that Ihor Hladkovskyy and his two associates illegally earned at least 250 million hryvnyas ($9.2 million) by smuggling the items from Russia through three major private firms, one of which belonged to Poroshenko at the time.

A day after the investigative report was broadcast on YouTube on February 25, Poroshenko suspended Oleh Hladkovskyy from his post and two days later announced that a probe had been launched into the allegations. On March 4, Poroshenko fired Hladkovskyy.

The election comes amid persistent economic challenges in the country and an ongoing war in eastern Ukraine against Russia-backed separatists.

The latest survey conducted by the nongovernmental Rating Groups showed that 41-year-old comedian Volodymyr Zelenskyy leads the election race with the support of 25.1 percent of voters. Poroshenko had 16.6 percent support, followed by former Prime Minister Yulia Tymoshenko with 16.2 percent.