Flanked by local government officials, Putin thanked the workers for their efforts to build "this huge project," in a ceremony broadcast live on state-run Russian TV. 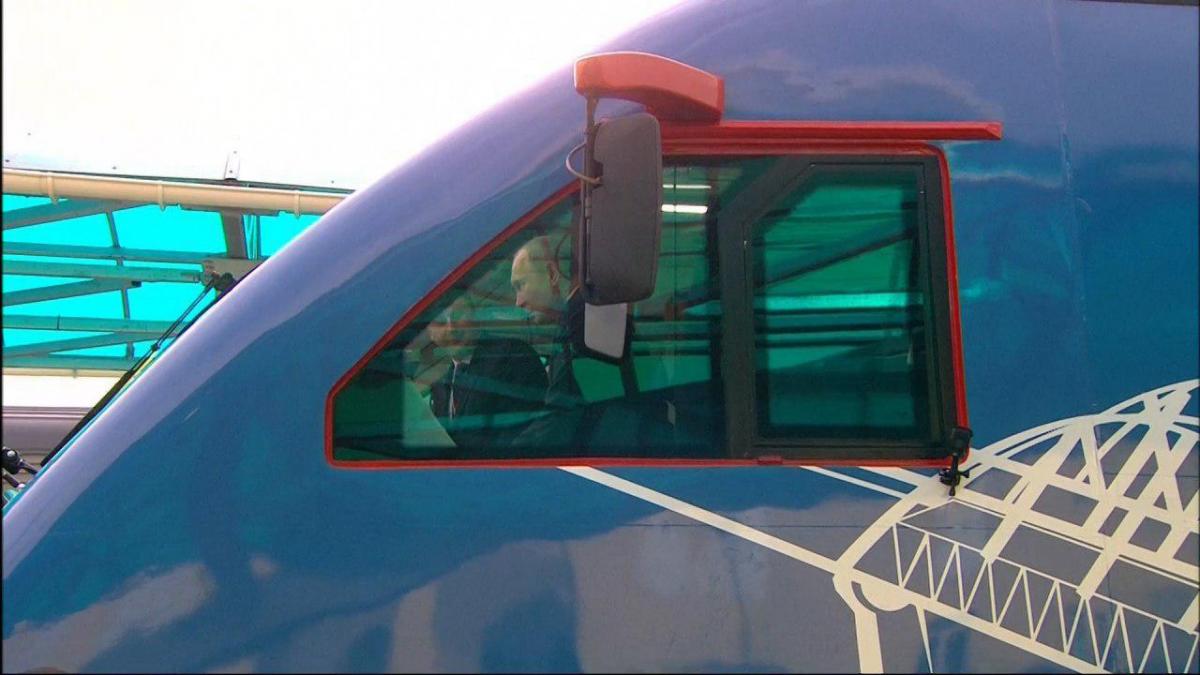 Kyiv, the United States, and European Union have condemned Russia's construction of the bridge, calling it a violation of Ukraine's sovereignty, with the Western powers imposing sanctions on firms associated with the building of the 19-kilometer long structure, RFE/RL wrote.

Flanked by local government officials, Putin thanked the workers for their efforts to build "this huge project," in a ceremony broadcast live on state-run Russian TV.

In November, the privately owned Grand Service Express railway company announced that the first train would depart from St. Petersburg for Sevastopol on December 23 and would travel 2,741 kilometers in 43.5 hours.

The segment from Moscow to Simferopol – the peninsula's capital city – is scheduled to depart on December 24 and travel 2,009 kilometers in 33 hours.

The bridge cost $3.7 billion to build and is Europe's longest, surpassing the Vasco de Gama bridge in Portugal.

The railway section of the bridge marks its expanded use after Putin opened the connection on May 15, 2018, for vehicle usage.

On that day, Putin was shown live on state television at the wheel of a Kamaz truck in a convoy of vehicles that crossed what Russia calls the Crimean Bridge – a symbol of Moscow's control over the Ukrainian peninsula.

Russia's Federal Road Transport Agency, also known as Rosavtodor, said on December 22 that Putin would take part in the ceremonies on December 23.

Crimea is connected to the mainland in Ukraine only, so the bridge is the sole link between the peninsula and Russia.

Ukraine has condemned the project not only for violating the nation's sovereignty and territorial integrity but also for its low clearance, which has encumbered maritime shipping traffic for Ukraine.

The spokeswoman of then EU foreign policy chief Federica Mogherini at the time said construction of the bridge "constitutes another violation of Ukraine's sovereignty and territorial integrity by Russia."

"The construction of the bridge aims at the further forced integration of the illegally annexed peninsula with Russia and its isolation from Ukraine, of which it remains a part," an EU spokeswoman said.

The U.S. State Department also condemned Russia's construction of the bridge, saying it was done "without the permission of the government of Ukraine."

"Russia's construction of the bridge serves as a reminder of Russia's ongoing willingness to flout international law," a spokeswoman said in May.

Sanctions imposed by the EU and the United States have targeted those involved in the construction, including businessman Arkady Rotenberg, a close Putin ally whose company won construction rights for the bridge.

Russia seized and annexed Ukraine's Crimean peninsula in 2014. The annexation has not been recognized by the world community.

Russia has also supported fighters battling Kyiv's forces in eastern Ukraine in a war that has killed more than 13,000 people since 2014.

If you see a spelling error on our site, select it and press Ctrl+Enter
Tags:News of UkraineRussiaCrimeaPutinrailwaystrafficceremonyKerchbridgeannexedcrimea