There was a clear hierarchy in the spy ring; its members maintained enhanced secrecy. 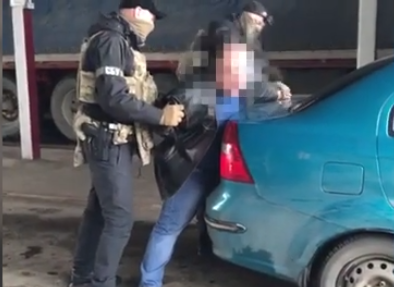 The man was detained on the border with Russia / Screenshot

The SBU Security Service of Ukraine has detained a former Ukrainian serviceman who headed a spy ring controlled by the Main Directorate of the Russian Armed Forces' General Staff.

"SBU counterintelligence agents have detained the head of an agent network of the Russian Armed Forces' General Staff, a former serviceman of the Armed Forces of Ukraine, when he was crossing the [Ukraine-Russia] state border. The perpetrator was going to Russia to report before his supervisors on the results of intelligence operations," the SBU's press center said on March 4.

Read alsoFate of Crimea traitors: "They either quit, or serve in remote Russian regions"

The SBU established that the former serviceman had been recruited by a member of the Main Directorate of the Russian Armed Forces' General Staff during his trip to Russia-occupied areas in Ukraine's Luhansk region temporarily beyond government control.

"His task was to collect and share intelligence data on military facilities of Ukraine's Armed Forces deployed in Volyn region [Ukraine's northwest]," the report said.

In addition, the offender, as instructed by his supervisors, engaged three pro-Russian locals to perform certain intelligence tasks.

"They were able to collect relevant information on the defense capabilities and combat readiness of military facilities, deployment sites of military equipment, its quantitative and qualitative characteristics, the location of ordnance depots. The accomplices also reported on participants in the ATO/JFO [the Anti-Terrorist Operation/the Joint Forces Operation] in eastern Ukraine," the SBU said.

Following Russian special services' instructions, the spy ring was built with a clear hierarchy in it and its participants maintained enhanced secrecy, the press center added.

Now, SBU investigators, under the procedural guidance of the prosecutor's office in Volyn region, are conducting raids on houses of members of the agent network.

The suspects are facing charges under Part 1 of Article 111 (high treason) of the Criminal Code of Ukraine and respective pretrial restrictions.