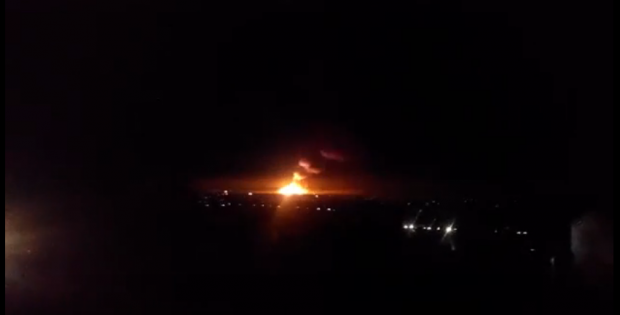 "Nobody is able to get closer than 500 meters there," he added.

Local residents are being evacuated to the town of Kreminna and the village of Troyitske in Luhansk region.

Local authorities report that some people have been moved to nearby bombproof shelters. Those who have decided to leave the town are being bussed to the district centers for accommodation at holiday hotels.

Hromadske.tv cites several local residents who said that some houses and garages were on fire. Fires caused by the explosions of military ammunition spread into the forests surrounding the town. Shells are now exploding in different parts of the town. One of the shells has hit a railway line 24 km from Svatove in the direction of  the city of Kharkiv. The rail service has been suspended at the moment.

All the 15 fire brigades that service Luhansk region have been sent to tackle the blaze. The gas supply of the town has been halted for safety reasons.

Klymenko had earlier reported about one local resident killed in a shell explosion, however, presidential administration spokesperson Oleksandr Motuzianyk did not confirm the information.

Chairman of Luhansk Regional Military and Civil Administration Heorhiy Tuka in turn said that the casualties of the incident included two killed and two injured persons.

He claimed it was an act of terrorism, and police had brought an action on charges of terrorism.

According to Tuka, those were shots from a pyrotechnic pistol that caused shells at the munitions depot to explode.

"There were two shots from a pyrotechnic pistol. Servicemen managed to extinguish a first one. But while they were busy with it, a second shot was made, triggering the fire," he told TV Channel 1+1.