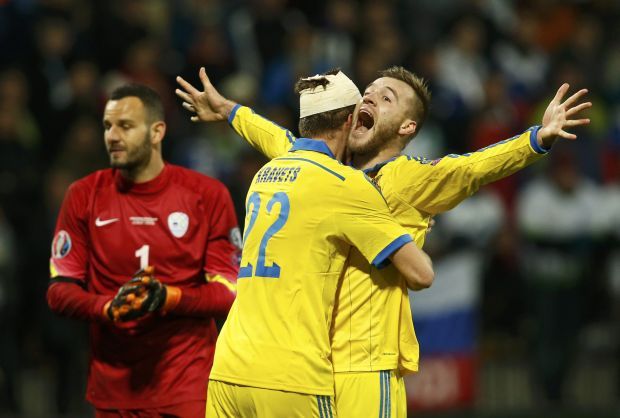 Slovenia captain Bostjan Cesar gave the hosts a dream start as he nodded home a rebound from close range after Andriy Pyatov had made two saves in quick succession, Sports Mole reporter Kristian Johnson commented on the game.

The first half was frequently disrupted by a series of cynical fouls by both sets of players which made it difficult for either side to create a clear opening. However, Ukraine almost levelled when Yevhen Seleznyov forced Samir Handanovic into a low save to his left following a quick breakaway by the visitors.

With 20 minutes remaining, Vyacheslav Shevchuk scuffed a low shot towards the far corner from the edge of the box which Handanovic kicked away with his feet.

A few moments later he was alert to push aside Andriy Yarmolenko's dipping effort and from the resulting corner Yaroslav Rakitskiy flashed a half-volley over the bar. However, Paytov had to make a reaction save to prevent Cesar's header from creeping inside the far post after the defender was found unmarked at a corner in the 75th minute.

The game was briefly halted with 10 minutes to go as flares were thrown onto the pitch, but when play resumed Slovenia continued to bombard the visitors. Amongst the Slovenia attacks, both sides flew into tackles and Miso Brecko's reckless challenge in injury time earned him a straight red card.

With the final kick of the game, Yarmolenko tapped the ball into an empty net with the entire Slovenia side caught upfield to spark wild celebrations from the visitors.