A group of Ukrainians on bicycles and on foot participated in a 65 km marathon between The Hague and Amsterdam in the Netherlands to show Ukraine's commitments to its European aspirations and call on the Dutch people to support the EU-Ukraine Association Agreement at a referendum on April 6, according to an UNIAN correspondent. 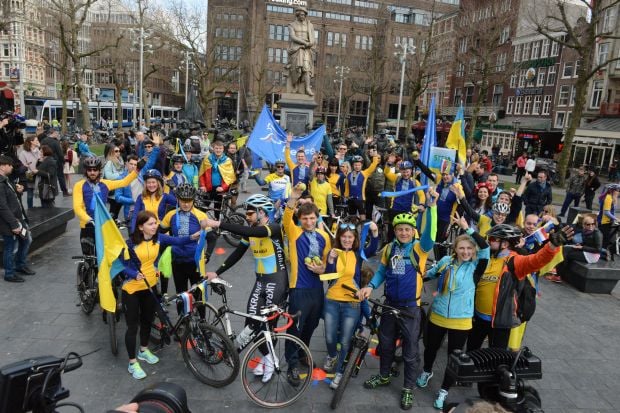 More than a hundred Ukrainians from different Ukrainian cities, namely from Kyiv, Chernivtsi, Odesa, Zhytomyr, and Volyn region, also joined by locals, ran the marathon – an event organized by the Sport for Peace charitable organization.

Volodymyr Kotyk from Zhytomyr told UNIAN that the event was planned to demonstrate that Ukrainians "are as European as the Dutch, who could support us."

"I like the Netherlands, but Ukraine is in my heart, and I want my country to change for the better," he said.

The participants in the event first arrived at Amsterdam's Rembrandtplein (Rembrandt Square) to meet with the Ukrainians who live in the Netherlands. The latter decorated the square with the Ukrainian flags, even the figures of a bronze-cast representation of Rembrandt's most famous painting, The Night Watch, had the Ukrainian insignia. Passers-by were given apples as the symbol of Ukraine's wealth.

"Ukraine is Europe. Say 'Yes' to Ukraine!" participants in the event were chanting. They also sang the Ukrainian anthem.

The second half of the event took place on Amsterdam's Dam Square, where a rally in support of the Association Agreement between Ukraine and the EU was being held with the participation of leading Dutch politicians, including Foreign Minister of the Netherlands Bert Koenders, as well as his Ukrainian counterpart Pavlo Klimkin.

Speaking about the importance of the Agreement, Koenders said that the support of Ukraine is important to the Netherlands.

"A safe country is important to all of us; investment in stability is important. It is also important that Ukraine should fight corruption and defend its borders. The second important thing is that yesterday 300 Dutch companies showed interest in coming to Ukraine, and these are not only international companies. The third important thing is to defend freedom in Europe together with other countries. It is practical and pragmatic, the Dutch way," Koenders said.

In his words, Ukrainians no longer want to live in the "post-Soviet system of oligarchs and corruption, therefore the Association Agreement is important."

Speaking to journalists, the minister said that he did not know what the outcome of the referendum would be.

"An exit poll shows a positive outcome, but we'll have to see it. I hope it will be advantageous," he said.

Ukraine's Foreign Minister Klimkin in turn called on the Dutch to support the Association Agreement between Ukraine and the EU. "It is important to have a program of European reform in Ukraine, it is important to enhance the protection of human rights in Ukraine, therefore I ask you – please come and vote for it, as your vote will go for Ukraine, for Europe, and for the Netherlands. And years after you'll be on home ground in Ukraine, as there will be the same standards, same rules for businessmen, Dutch farmers, who will come to us. Please, come and say 'yes,'" he urged.

The Ukrainian minister thanked all the participants in the event in support of Ukraine. "This was a fantastic campaign. Even if there weren't any referendum, we would use this challenge to show a modern, European-oriented Ukraine to the Netherlands," he said.

Klimkin said he was sorry to riding a bike for only a couple of kilometers in Amsterdam, as he was supposed to head the column during the whole marathon. "I'm thankful to all of you who were riding along and to all who have managed to demonstrate that the Ukrainian and Dutch people should be together. This agreement is not only the political and economic provisions, it's people who work together one way or the other. I am eternally grateful for this," Klimkin said.

As UNIAN reported earlier, the Netherlands will hold a consultative referendum on the Ukraine-EU Association Agreement on April 6. The question that will be asked is whether a voter is for or against the ratification of the agreement. The referendum was initiated by GeenPeil, a politically geared initiative by GeenStijl, a Dutch weblog known for its provocative content and its past hoaxes.