Opposition Bloc leader Yuriy Boyko and Opposition Bloc member, oligarch Vadym Novinsky, who arrived in Odesa on Monday to take part in a rally on Kulykove Pole Square, have been forced to depart for Kyiv without leaving the city's airport, according to Zorian Shkiriak, an adviser to Ukrainian Interior Minister Arsen Avakov. 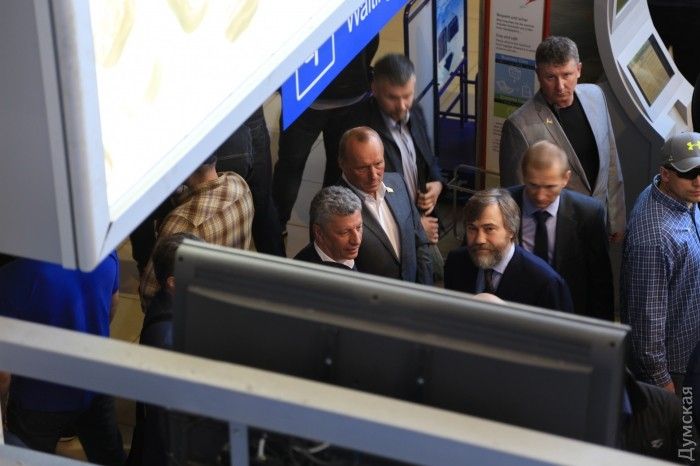 Boyko (low left) and Novinsky (low right) were forced to return to Kyiv / Photo from dumskaya.net

"Boyko, Novinsky and [Opposition Bloc member, former chairman of Naftogaz's board Yevhen] Bakulin have left Odesa. Pax Rossica supporters, who bear personal responsibility for the May 2, 2014, tragedy, are not welcome in a patriotic Odesa," he wrote on Facebook.

He expressed gratitude to pro-Ukrainian activists for patience, understanding, and respect for the rule of law and cooperation with law-enforcement agencies.

Chief of the National Police's Odesa regional department Giorgi Lortkipanidze later wrote on Facebook that "the negotiations [with the members of the Opposition Bloc, which is the successor of former president Viktor Yanukovych's Regions Party] were successful, and the MPs decided to leave Odesa."

MP from the People's Front Serhiy Vysotsky, who is also in Odesa now, said Odesa patriots representing such organizations as Vilni Lyudy (Free People), Automaidan and Right Sector, DIYA [Derzhavna Initsiatyva Yarosha, or the national movement "The State Initiative of [Right Sector's former leader Dmytro] Yarosh"], Self-Defense of Odesa's Maidan had not let some MPs from the Opposition Bloc in Odesa.

"The agenda of the [former] Regions Party members was clear – they wanted to get to Kulykove Pole together with the relatives of the victims and stage an anti-Ukrainian meeting, making a political performance out of the mourning ceremony. The ceremony has been rescheduled several times to be synchronized with those people's arrival," Vysotsky wrote.

According to him, Russia is now attempting to launch "disguised, secret re-occupation of Ukraine, as it was not Boyko but Pax Rossica that has tried to get in Odesa under the guide of the mourning event."

"It is Pax Rossica that killed those victims in the Trade Unions House [fire two years ago]," he added.

Read alsoSaakashvili: Tactics used by Russia in Crimea may be used in Odesa on May 2He also said that after the Kulykove Pole event, the Opposition Bloc members' were scheduled to join a birthday party arranged by another Opposition Bloc member Serhiy Kivalov. "This is how they're mourning," he added.