In a twist, one of those who verbally attacked the woman turned out to be a candidate running for the local council.

A comment made by a commuter riding a bus in Sloviansk (Donetsk region), calling for a passenger to follow quarantine-related safety norms and wear a mask properly on public transport has led to an ugly altercation where passengers verbally assaulted the woman over her speaking to them in the Ukrainian language.

The woman managed to film on her phone a surge of Ukraine-phobic comments that flew her way, the Donetchanyn Telegram channel reported.

"We've already seen enough of your kind – look where they brought the country to! Civil activist, look at her! Coming to us, to our East… You spoil our life here!" one of the female passengers yelled at the woman in Russian.

Having responded to the attack that she was actually born in Sloviansk and has been living there, the activist heard: "In Sloviansk?! So speak the Sloviansk way […] All people are normal and adequate here."

Eventually, the woman was forced out of the bus by an aggressive man who sided with the attackers.

The story saw a twist after one of the attackers was identified on social networks as a candidate to the city council with the Nash Krai party, Valentyna Pavlova, who is a local woman who has worked in kindergartens, then as a call center manager, and an accountant before retiring, RFE/RL reported. 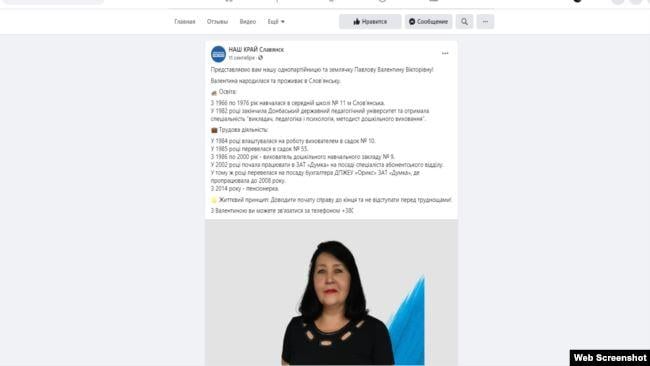 Following the incident, the post has been deleted from the party platform

The local police have already opened a criminal case into the violation of citizens' equality in relation to their race, nationality, religious beliefs, disability, and other features.

Sloviansk was liberated by Ukrainian troops from Russian invaders in July 2014 after several months of occupation, according to Wikipedia.

One of the candidates for the mayor's post in this year's elections was the odious Nelia Shtepa, who led the city in 2014 and called for the locals to side with the Russians.

She didn't make it to the local election runoff, while the second round will see two competing candidates who also represent pro-Russian forces.