"I'm not some loser!": Zelensky to volunteer during visit to disengagement area

Zelensky snapped at a soldier's question on whether he is going to meet with war veterans regarding the "No to surrender" rallies held across Ukraine. 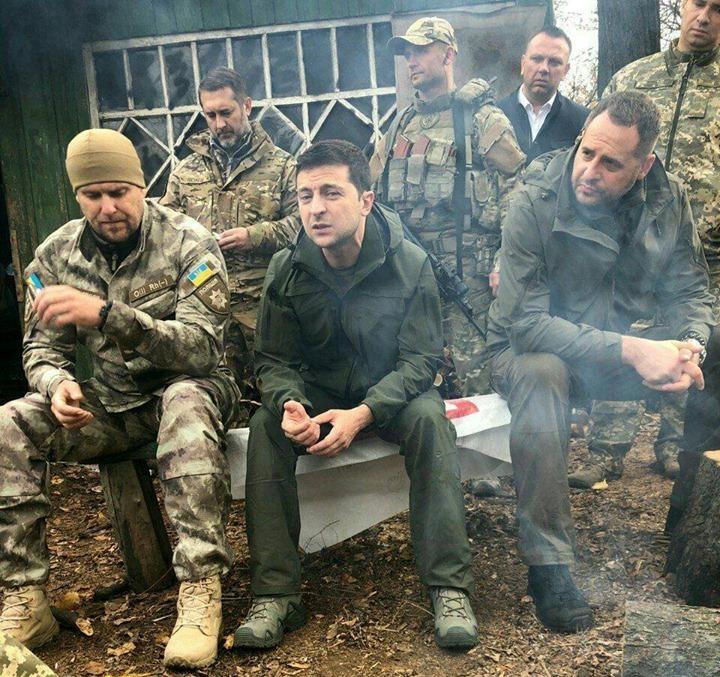 In an unannounced move, the president personally visited the settlement of Zolote, where the next stage of disengagement of forces is set to take place, to talk with volunteer troops stationed in the area.

"Zelensky came to volunteers in Zolote. A serious conversation about the disengagement and the front," reads the report on one of the Telegram channels of the National Corps.

The troops offered the head of state some tea and invited him to have a seat and talk with them.

In the video published in social networks, one of the troops is heard telling the president: "We are hospitable here – have a seat and let's talk."

Zelensky accepted the invitation but later into the conversation he apparently snapped at the question on whether he is going to meet with war veterans regarding the "No to Surrender" rallies held across Ukraine [in a protest against the implementation of the so-called Steinmeier formula of Donbas settlement].

"People demanded a meeting," the serviceman told the president.

"I came to tell you to withdraw weapons. And you're flipping the topic. You can't be voicing any ultimatums to me in the first place," Zelensky answered.

To the military's claim that someone might have handed the president information about the protests in Ukraine and the desire of the participants to meet with him, Zelensky replied: "Who did? It was raining across Ukraine yesterday – that's what they told me."

The soldier who identified himself as Denys, explained that the veterans had handed a letter to the Governor of Mykolayiv region with the demand to see the president.

"He did hand it to me, and I'll read it. Listen, I'm the president of this state. I'm 42. I’m not some loser. I came here to you, telling you 'take away your weapons'. So don't you flip this all to rallies," Zelensky said.

"I sought to see understanding in your eyes. But what I'm seeing is a guy who thought he's talking to some softie, trying to shift topics," Zelensky added, once again vowing to read the letter.

As reported earlier, disengagement of troops in Luhansk region was agreed during the round of Minsk talks Oct 1.

Disengagement was supposed to start on Oct 7, but it was postponed due to constant shelling by Russian occupation forces. The last time the enemy opened fire at the positions of Ukrainian troops in the disengagement near Petrivske was on Oct 25.

In the fall of 2016, participants in the Trilateral Contact Group signed an agreement on the disengagement of forces and means near three settlements on the line of contact - Petrivske, Zolote, and Stanytsia Luhanska.

The disengagement near Petrivske and Zolote did take place back then but never prevailed.

In the summer of 2019, after a change of government in Ukraine, disengagement was conducted near Stanytsia Luhanska.