Vladimir Putin says there are no Russian soldiers in Ukraine, but the deaths of three young servicemen tell a different story. 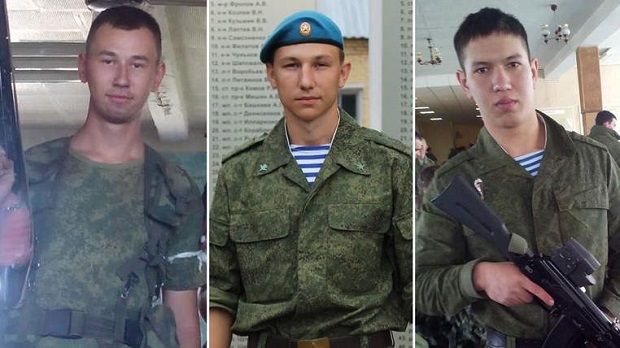 The recent deaths of three Russian servicemen raise serious questions about the Kremlin's claim that its military is not operating in Ukraine.

Our team travelled to remote villages in central and southern Russia to find the freshly dug graves of three young men, each bearing a wreath from Russia's ministry of defence.

Anton Savelyev, Timur Mamayusupov and Ivan Kardapolov died on the same day - 5 May, 2015.

Social media activists connected their deaths through tributes posted online, and identified the locations of their graves

They found references to the elite 16th Brigade Spetsnaz, but when Sky News asked at the base they denied having heard of any of the men.

We found the first grave in a small cemetery in the Tambov region of southern Russia, a few miles from where the 16th Brigade is based.

He was pictured on social media standing in front of the 16th Brigade memorial.

‎On his grave there was a wreath addressed: "To the Defender of the Fatherland, from the Ministry of Defence of the Russian Federation."

Other flowers were marked: "From comrades" and "From the command of the unit".

A lady who knows the family ‎said Anton Savelyev "died heroically" but asked us not to give her name for fear of the consequences of speaking out.

"They were sent to Rostov and in Ukraine. In Ukraine everything is done quietly," she said.

"We don't know where exactly, but somewhere there.

"It's Ukraine's fault that he died of course. It's a shame that we die for not our motherland."

From there we flew to Ufa in central Russia, then by road to the republic of Tatarstan - the home of Timur Mamayusupov.

His grave was strikingly similar to Anton's - we found the same wreaths from the ministry of defence and the unit command, and the same date of death.

Photos uploaded to Russian social media sites show Timur posing with the Spetsnaz flag, along with a service medal for the Russian military operation in Crimea last year, which was denied by Russian authorities at the time.

Other photos show Timur with the flag of the separatists' Luhansk People's Republic, and in front of a distinctive armoured personnel carrier (APC) known to have been used by the rebels in East Ukraine.

Timur's mother told Sky News she was given a notice of death from the military that said her son had died "in the North Caucasus" - a restive region in southern Russia - but no specific location.

But there are no reports of Russian military casualties around this date in either Russian or local media, or from militant groups known to operate there, for whom the death of a Russian soldier would be a powerful propaganda tool.

Guzel Mamayusupov said she had been worried her son might be sent to Ukraine, and he had told her he would go if he was asked.

"When he was on vacation I told him that if you get sent to Ukraine, let me know," she said.

Russia blogger Ruslan Leviev has led the social media investigation into the deaths and his network first connected the three men.

"Many relatives of both Timur and Ivan wrote on social media websites that they died at war," he said.

"We all know that there is no war in the North Caucasus, there is no anti-terrorist operations there at the moment.

"There is only one war and that's in eastern Ukraine."

Ruslan has been getting death threats - he showed us a photograph of a funeral wreath in his name - but he is determined to continue with his work.

"We want to show the people that our government is lying even to its soldiers, that they abandon them, those who were captured and died," he said.

The third man, Ivan Kardapolov, was from another rundown rural village, close to the border with Kazakhstan.

Again, we found the same wreaths at his grave, and the same date of death.

The location is so remote that at first very little was known about Ivan, but then a local man read about the deaths on Ruslan's blog and decided to investigate the death in this region.

He said Ivan's brother told him that at the funeral there were Federal Security Service officers who had asked mourners to remove their parade uniforms.

But they had refused and paid their last respects in military dress.

It was not possible to independently verify this account.

The family said they had been told that Ivan died in the North Caucasus, but again with no more specific location.

Several of his friends from the village told us Ivan died in Ukraine.

A man who gave his name as Dmitry said: "His niece was told that he was in Ukraine, that's where he died.

"The notice of death came, the military recruitment officer brought it personally."

Another man said Ivan died "in Donbas", a region claimed by pro-Russian rebels in Ukraine.

He said there had been paratroopers at the funeral, but that Ivan himself "was Spetsnaz".

In each of the three locations a number of people told us the men "died heroically" - but if they did, serving their country, and not in Ukraine, why is their government silent about their deaths?

And if these men had left the army and were not on active duty at the time, why is the ministry of defence sending flowers to their funerals?

We put these cases to ministry of defence, and Federal Security Services, but have yet to receive a response.

Russian officials, from the President down, continue to insist there are no Russian soldiers in Ukraine and that any Russian citizens who might be there are "volunteers".‎

Vladimir Putin has since signed a decree declaring the deaths of Russian servicemen in "special operations" a state secret - but no such operations have yet been announced.