55 Grad rockets fired on ATO forces near Novotoshkivske on Thursday

On Thursday, Russian-backed militants fired 55 Grad rockets on the Ukrainian troops deployed near the village of Novotoshkivske in Luhansk region. 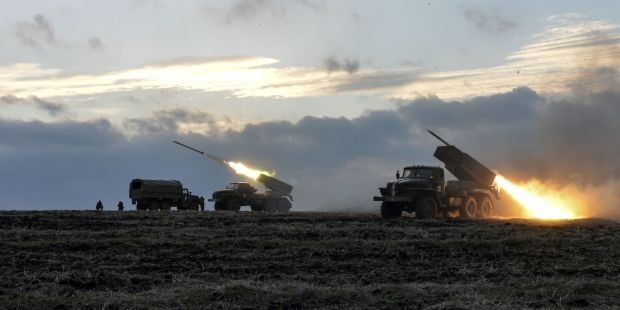 Militants haven't ceased fire from heavy weaponry in eastern Ukraine, thus continuing the violation of the Minsk peace agreements, the press center of the Anti-Terrorist Operation (ATO) wrote on its Facebook page.

Almost a half of the 40 cases when militants used heavy weapons on Thursday were recorded in the Luhansk and Artemivsk sectors.

"In the morning, 55 Grad rockets hit the positions of the Ukrainian troops near the village of Novotoshkivske. The town of Zolote was under repeat mortar fire. Militants fired heavy machine guns and automatic grenade launchers on the town of Schastia," the ATO press center said.

Militants used 152mm-caliber howitzers, mortars of various calibers, grenade launchers and small arms to fire on the villages of Luhanske, Troyitske, Novozvanivka, and the town of Svitlodarsk. In the afternoon, 120mm-caliber shells exploded near the town of Popasna in Luhansk region.

The Ukrainian troops near the town of Maryinka in Donetsk region were under intense mortar fire. An enemy sniper was also working there. Terrorists used 122mm-caliber artillery systems and tanks to fire on residential areas in the village of Vodiane in Donetsk region.