The situation in Donbas has been escalating as the combined Russian-separatist forces attacked Ukrainian army positions and civilian areas in eastern Ukraine 100 times in the last day, the press center of the Anti-Terrorist Operation (ATO) wrote on Facebook on Wednesday. 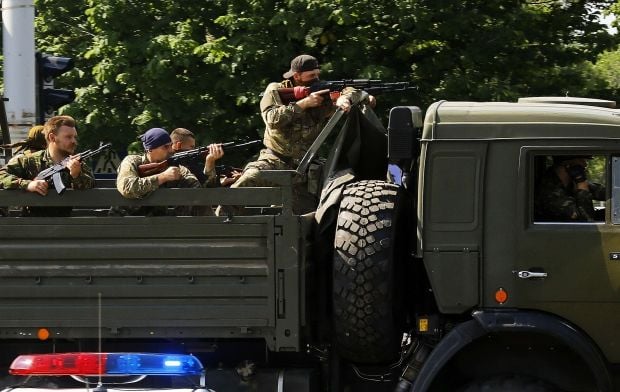 "The militants fired 152mm and 122mm artillery systems 19 times on the positions of the Ukrainian armed forces, 120mm mortars 33 times, multiple rocket launchers twice, and there were 13 attacks by tanks," the report reads.

From 18:00 to 24:00 Kyiv time on Tuesday , there was the highest number of enemy attacks per day: the Ukrainian troops were under fire near the town of Avdiyivka, the villages of Opytne, Vodiane, Pisky, Kirove, Novhorodske, Luhanske in the Donetsk sector.

In the Luhansk sector, the combined Russian-separatist forces fired on Ukrainian troops near the villages of Stanytsia Luhanska, Novotoshkivske, Krymske, and Triokhizbenka. In the Mariupol sector, the illegal armed groups used only small arms to fire on the villages of Talakivka and Mykolaivka.

"As of 06:00 Kyiv time on July 15, terrorists fired 122mm howitzers and 120mm mortars on our troops near Avdiyivka, Opytne, and Starohnativka. Around midnight, Ukrainian soldiers located and repulsed a militant sabotage and reconnaissance group near the village of Opytne," the press center said.

"The Ukrainian armed forces are firmly holding their defensive positions and repelling the enemy, being ready for any scenario of developments," the report says.