The situation in the Donbas conflict zone remains tense as the combined Russian-separatist forces continue to fire mortars and artillery on Ukrainian army positions, head of the press center of the Anti-Terrorist Operation (ATO) headquarters, Colonel Oleksandr Motuzianyk said at a briefing on Thursday, according to an UNIAN correspondent. 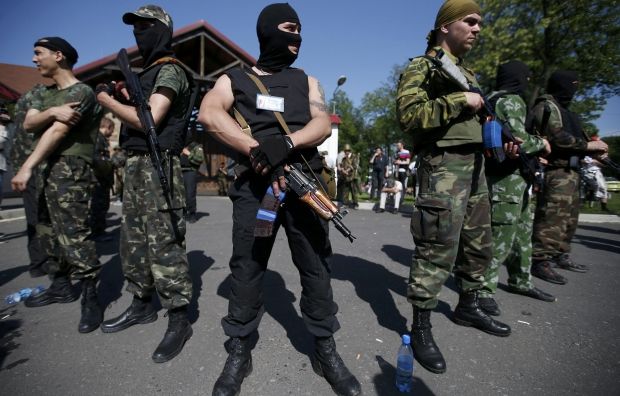 According to Motuzianyk, the situation is relatively calm in the direction of Luhansk. The enemy fired mortars on ATO forces on one occasion in the village of Krymske. The militants also fired small arms and rocket-propelled grenades on the village of Stanytsia Luhanska, and the towns of Schastia and Zolote.

"In the direction of Donetsk, the illegal armed groups continued to fire mortars and artillery on the positions of the Ukrainian armed forces at the first and second defense lines near the town of Svitlodarsk. We would like to emphasize that the militants opened fire in the daytime as well," he said.

According to the military fficial, the distance between the artillery battery in the Putylivskiy forest and the demarcation line is less than four kilometers. Despite heavy enemy fire, ATO forces are still holding the perimeter and the front line remains stable.

In addition, according to Motuzianyk, the enemy fire doesn’t subside along the perimeter near the town of Horlivka, but the situation was the most difficult near the village of Novhorodske, where the enemy fired 122mm artillery twice on the ATO forces.

However, the most difficult situation remains the north-west of Donetsk. About two-thirds of all militant violations of the ceasefire took place in the section between the towns of Avdiyivka and Maryinka. The enemy has concentrated large forces on the front lines, including heavy weapons.

A lull is being observed in the area of Mariupol. Only two brief armed provocations have been recorded in the village of Shyrokyne.

On July 22, the Ukrainian army recorded eight reconnaissance overflights by enemy drones in Donbas, and one in Sumy region.