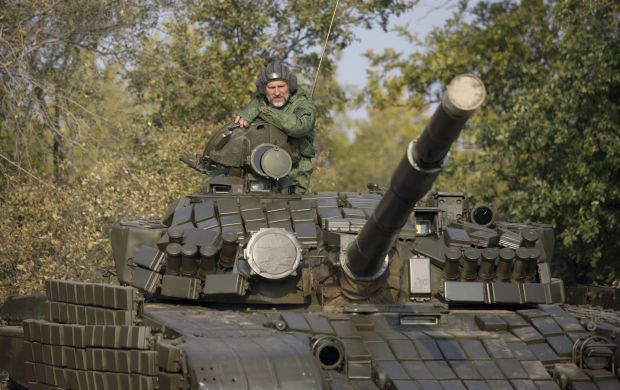 "Another concern is that the OSCE SMM [Special Monitoring Mission to Ukraine] still has limited access to all the places where withdrawn weapons are stored in some [militant-controlled] areas in Donetsk and Luhansk regions and to the temporarily uncontrolled section of the Ukrainian-Russian border, across which arms, military hardware and ammunition are being supplied to militants," the press center quoted the JCCC's Ukrainian team leader, Major-General Borys Kremenetsky, as saying.

In his words, "the situation along the contact line has sharply deteriorated as of October 18, 2015, which coincided with the beginning of the second weapons pullback phase, and has a strong tendency to further escalation."

From October 18 to November 6, the JCCC's Ukrainian members recorded 26 cases when the ceasefire in Donbas was violated and 361 cases when Russian-backed militants shelled Ukrainian positions and the so-called "gray zone" in order to provoke backfire, Kremenetsky said.

"The latest aggravation of the situation was seen in the run-up to a meeting of "Normandy Four" foreign ministers in Berlin," he added.

Areas around the ruined Donetsk airport, which is controlled by Russian proxies, as well as in the villages of Pisky, Opytne, and Shyrokyne (the latter is located near the Ukrainian-controlled city of Mariupol), and the town of Maryinka remain the hottest spots in Donbas now.

"The JCCC's Ukrainian team considers such provocative actions by illegal armed groups in some areas in Donetsk and Luhansk regions as deliberate steps to destabilize the situation and the unwillingness of the illegal armed groups' leaders and their sponsors to fulfill the undertaken obligations to cease fire and de-escalate the situation along the contact line. As a result, this may disrupt the withdrawal of weapons and cause further escalation of the conflict," Kremenetsky said.

In his words, the JCCC's Ukrainian representatives will be forced to propose that the Trilateral Contact Group discuss the situation should provocative shelling of the Ukrainian army's positions and civilians in Ukrainian villages and towns continue.

The foreign ministers of Ukraine, Russia, Germany and France in Berlin on November 6 agreed on the completion of the withdrawal of heavy weapons from the contact line in Donbas.

German Foreign Minister Frank-Walter Steinmeier also announced that mine clearance in the Donbas conflict zone should be over by the end of November.