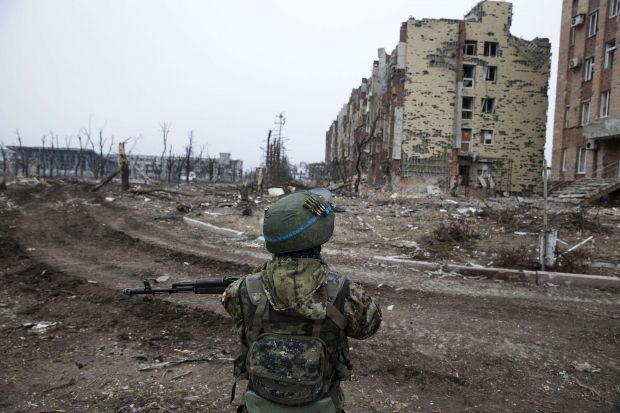 They were shelling the Ukrainian positions near the ruined Donetsk airport, the town of Avdiyivka, and the Zenit position, which is the area of a former Ukrainian air defense missile battalion, which is a few kilometers from the village of Spartak in Donetsk region. The Butivka coalmine is not far from that area. Zenit is a strategic stronghold, as the road to Avdiyivka, and the villages of Opytne and Pisky is seen from it.

The shelling lasted for an hour and a half, Seleznev said.

He did not confirm reports that the enemy had used artillery systems to shell the Ukrainian forces.

"Reports about artillery systems haven't been confirmed, but we continue the verification of reports that militants used the weapons that are prohibited by the Minsk agreements," he said.

At the same time, Ukrainska Pravda wrote, one of the soldiers participating in the Anti-Terrorist Operation (ATO) in eastern Ukraine told the portal that the Russian proxies had used tanks and anti-tank grenade launchers.

Seleznev also reported that in the 24 hours prior to 20:00 local time on Monday, militants had made 43 rounds of provocative shelling, four of them were aiming at the ATO forces.

In his words, under enemy fire were Ukrainian positions near the airport, Avdiyivka, Opytne, the town of Krasnohorivka and the village of Troyitske in Donbas. The enemy fired for effect once – it happened near the village of Novhorodske in Donetsk region at 08:00 local time on Monday. "One person was wounded. His condition was satisfactory. He's got a shrapnel wound," Seleznev said.

The village of Shyrokyne, which is near the Ukrainian-controlled city of Mariupol at the Sea of Azov, was under mortar fire – militants were shelling 82mm caliber mortars, which should have been withdrawn three days ago.

When asked whether the Ukrainian armed forces would open backfire, Seleznev said that it had happened four times in the past 24 hours, however, no banned weapons were used. "We don't use the weapons that are banned under the Minsk agreements," he added.