The situation in the Anti-Terrorist Operation (ATO) zone in Donbas, eastern Ukraine, was tense the whole day on Tuesday with almost all the sectors being under militant fire, according to the ATO Headquarters press center. 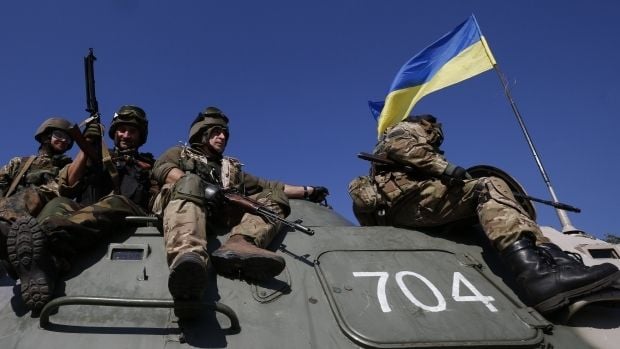 "Terrorists continued firing almost in all the directions," the press center wrote in an update on Facebook on Tuesday evening.

In particular, they attacked Ukrainian positions near the militant-held city of Donetsk, using 120mm mortars, anti-aircraft guns and grenade launchers for provocative firing in the direction of the town of Krasnohorivka. They also used grenade launchers and small arms to shell the villages of Pisky [near the destroyed Donetsk airport], Opytne and Novhorodske, and the town of Avdiyivka.

What is more, the Russian proxies used grenade launchers, heavy machine guns and small arms to attack the villages of Luhanske, Zaitseve and Mayorske [the latter two are located near the militant-controlled town of Horlivka in Donetsk region].

The Ukrainian positions near Avdiyivka, Opytne, Pervomaiske, Pisky and Balka Pavlova had been under the enemy's aiming fire since 13:00 local time on Tuesday, the ATO Headquarters reported.

All in all, the Russian-backed militants attacked Ukrainian troops 53 times in the past 24 hours, the Ukrainian Defense Ministry's GUR Main Intelligence Department reported in turn.

"The situation in the ATO zone remains aggravated with risks of sparking local fighting. On November 23, the enemy made 53 attacks with the use of small arms, including portable anti-tank missile systems and automatic grenade launchers, as well as ZU-23-2 anti-aircraft twin heavy machine guns, BMP-2 infantry combat vehicles, 82mm-caliber mortars," the department said.

The Ukrainian military continues to inform the OSCE Special Monitoring Mission (SMM) to Ukraine about the violation by the Russian-backed terrorists of the Minsk peace agreements. The OSCE SMM was informed that the enemy had massed tanks, heavy artillery systems whose caliber is more than 100 mm, and 122mm Grad multiple rocket launchers near the town of Horlivka in Donetsk region and the town of Zymohirya in Luhansk region.

The enemy's major efforts focused on "strengthening of the units of the 1st and 2nd Army Corps' advance echelon in the Slovyansk and Mariupol directions; camouflaging of the weapons and military hardware banned under the Minsk accords in the Novoaidar, Sloviansk and Volnovakha directions; and on logistics support of the units belonging to the 1st and 2nd Army Corps."

The Russian proxies also intensified intelligence, gathering information about the ATO forces with the involvement of sabotage and reconnaissance groups in the Novoaidar, Sloviansk, Donetsk, Volnovakha and Mariupol directions.

Reconnaissance units of the brigades of the advance echelon, radio electronic intelligence, and reconnaissance aircraft of the Armed Forces of Russia became more active in the zone.