The combined Russian-separatist forces attacked Ukrainian army positions in eastern Ukraine 64 times in the past 24 hours, compared to 91 times the day before, according to the press center of the Anti-Terrorist Operation (ATO). 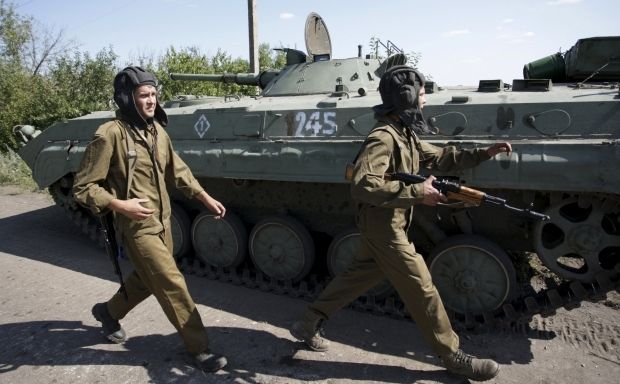 "The Armed Forces of Ukraine recorded 16 militant attacks with the use of mortars. The occupiers fired 120mm mortars on the Ukrainian positions near the villages of Troyitske and Luhanske, as well as 82mm mortars near the villages of Talakivka, Shyrokyne, Mayorsk, and Novoselivka. The enemy activity was observed in the outskirts of the town of Avdiyivka, where the militants fired the mines of both calibers on the Ukrainian soldiers in the industrial zone," the report says.

Read alsoCivilian wounded in militants artillery attack on Maryinka The invaders also fired cannon artillery on the Ukrainian fortified positions near the village of Berdianske. In particular, they fired 122mm-caliber weapons 35 times in the direction of the village of Sakhanka.

"In addition, using anti-aircraft guns, rocket launchers, machine guns, small arms and snipers, the Kremlin-backed mercenaries ceaselessly fired on our fortified positions near the town of Maryinka, and the villages of Opytne, Stanytsia Luhanska, Pavlopіl, Zaitseve, Novotroyitske, Pisky, Novhorodske and Verkhniotoretske. Despite considerable efforts of the enemy, the ATO units continue to control the situation. During this period, they had to return fire seven times," the press center said.