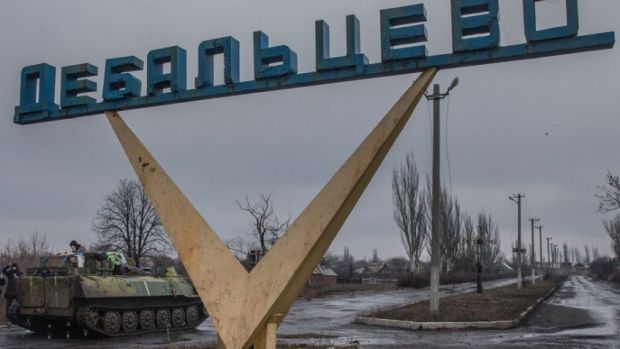 "During the security subgroup's work Ukraine has once again raised the issue of returning to the dividing line of September 19, 2014, according to which Debaltseve is to be under Ukraine's control. Further implementation of the framework decision on disengagement of forces and military hardware can take place after demilitarization of Debaltseve," Darka Olifer, the spokesperson of Ukraine's envoy to the Trilateral Contact Group Leonid Kuchma, wrote on Facebook after a new round of the talks on Wednesday.

Read alsoRussia refuses to return occupied Debaltseve under Ukraine controlAs UNIAN reported earlier, the Trilateral Contact Group on September 21 signed a framework agreement on disengagement of forces and hardware along the contact line. The document stipulates that the disengagement in the areas of Stanytsia Luhanska, Zolote, and Petrivske should start only on condition of a seven-day truce.

The agreement says that the withdrawal shall be carried out by moving the forces and military hardware back from their positions on both sides in order to create disengagement areas, usually not less than two kilometers wide and two kilometers deep. At this, the very process of disengagement shall be monitored by the OSCE Special Monitoring Mission to Ukraine.

The forces were disengaged in Zolote on October 1 and in Petrivske on October 7. The withdrawal of the troops in Stanytsia Luhanska was scheduled for October 9 but failed due to militant attacks on Ukrainian positions.

Speaking at a briefing following the talks, Poroshenko said that the parties had agreed that after the disengagement in the first three areas – Zolote, Petrivske and Stanytsia Luhanska – the OSCE 24/7 permanent monitoring posts should be set up there. And after that, they will begin negotiating the next four areas of disengagement. The Ukrainian side also insisted on the demilitarization of Debaltseve.

On October 20, Putin's press secretary Dmitriy Peskov said that Russia disagreed with the idea of returning Debaltseve under Ukraine's control. He said work on the issue would be continued at the level of ministers and aides.