The additional personnel were deployed to remove potentially contaminated evidence. 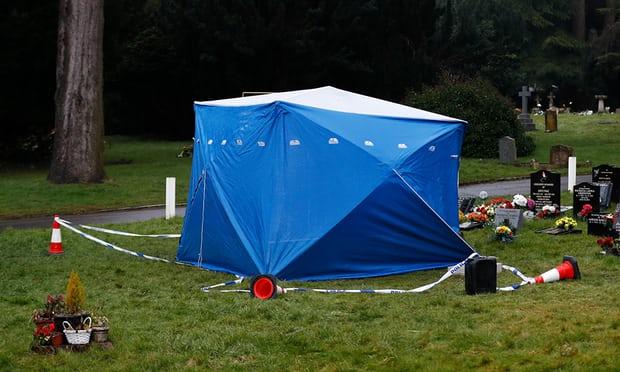 A military convoy arrived at Salisbury district hospital and investigators in hazmat suits were seen at the cemetery where Sergei Skripal's wife was buried as the investigation into the nerve agent attack on the Russian former spy gathered pace.

More than a dozen vehicles were at the hospital as part of an operation to remove a police car from the site in the aftermath of last Sunday's attack, The Guardian wrote.

Read alsoBritain will act against nerve agent attackers once facts known: ministerTwo military lorries arrived at A&E with police escorts, incident response units and an ambulance. Earlier on Friday, it was reported that about 180 military personnel had been called in to assist the investigation into the attempted murder of the Russian former spy Sergei Skripal and his daughter, Yulia.

The additional personnel were deployed to remove potentially contaminated evidence. Meanwhile, police were seen at the cemetery where the grave of Skripal's wife, Liudmila, and a memorial to his son, Alexander, who both died in the last few years, lie in adjacent plots that had been cordoned off earlier in the week.

Police placed a blue forensic tent over the memorial to Alexander at Salisbury's London Road cemetery. Fire officers in hazmat suits were seen pinning down the tent, while other officers in white suits and gas masks were seen packing items from the cemetery into a yellow barrel.

It had previously been reported that Liudmila died of cancer in 2012 aged 59, while Alexander Skripal died in March last year in St Petersburg, aged 43, in unknown circumstances.

The Metropolitan police said reports that a body had been exhumed on Friday were untrue. It is believed that Yulia Skripal may have visited her brother's memorial stone on his birthday, 1 March – three days before she and her father were taken ill.

Read alsoRussian FSB earlier used substance that poisoned ex-Russian spy SkripalAs the investigation entered a new phase, the authorities were still seeking to establish exactly where and when a British police officer was poisoned.

DS Nick Bailey is seriously ill in hospital having visited the home of Skripal after the defector and his daughter were found slumped on a bench in Salisbury, Wiltshire, on Sunday afternoon.

Investigators want to know whether Bailey visited the scene where the two Russians were found and was poisoned there or by items there, or whether the officer was contaminated on his visit to Skripal's home.

Sources say that, while it is not certain, it is believed more likely that Bailey became contaminated on his visit to the home.

Uncertainty about how and where Sergei and Yulia Skripal were poisoned led to police requesting military assistance on Friday to secure contaminated evidence. It is understood that personnel from the Royal Marines, the RAF and chemical teams were involved in the operation.

The Met police said the units were called in because they had "the necessary capability and expertise" and urged the public not to be alarmed.

Sergei, 66, and Yulia, 33, are comatose in hospital after being found unconscious on a bench in the Maltings shopping centre.

The use of a nerve toxin is seen as a key indicator of possible Kremlin involvement, with such substances usually held only in state military stockpiles.

Moscow has repeatedly denied it had anything to do with the attack, the same line used when Litvinenko was poisoned with radioactive polonium-210 in his cup of tea. A public inquiry a decade later concluded that the Kremlin had ordered the assassination.

If you see a spelling error on our site, select it and press Ctrl+Enter
Tags:RussiainvestigationpolicecemeterypoisonSkripal