FEMEN is an anti-war group with origins in Ukraine known for topless protests at high-profile events. 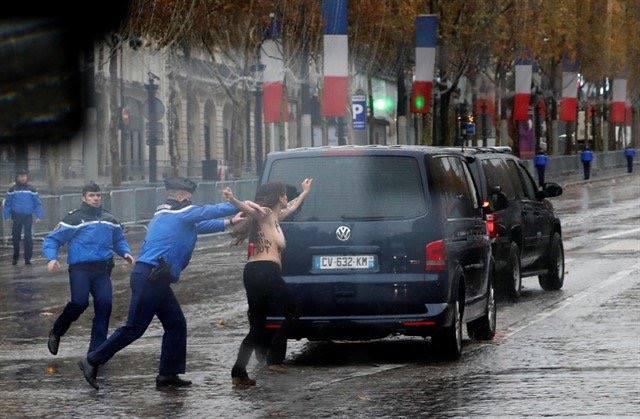 A topless protester ran into U.S. President Donald Trump's motorcade as it drove down the Champs-Elysees to an Armistice Day event with world leaders.

The woman, who was quickly detained by police, came within a short distance of the president's limousine, which was driving slowly toward the Arc de Triumph, Bloomberg reported.

FEMEN, an anti-war group with origins in Ukraine known for topless protests at high-profile events, claimed credit for the incident.

A second topless protester was detained as she attempted to clear barricades that had been erected for the event. The women appeared to have the phrase "Fake Peacemakers" daubed on their torsos. FEMEN claimed three protesters breached the barrier.

Inna Shevchenko, leader of the FEMEN group, tweeted a video of the incident and said the presence of Trump and other world leaders, including Russian President Vladimir Putin and Turkish President Recep Tayyip Erdogan, had transformed the Armistice Day event "into a sad spectacle which is entertaining only for the criminals participating in it."

The U.S. Secret Service did not immediately respond to a request for comment about the security breach, which occurred just outside the Louis Vuitton flagship store.

The incident occurred shortly after other world leaders and dignitaries, led by French President Emmanuel Macron, walked down the Champs-Elysees avenue toward the event marking the 100th anniversary of the end of the First World War. Some leaders, including Trump and Putin, did not participate in the march, citing security concerns.

If you see a spelling error on our site, select it and press Ctrl+Enter
Tags:USAFranceTrumpParisFemen