Putin and the Kremlin have so far avoided commenting on the unrest over the Moscow city elections. 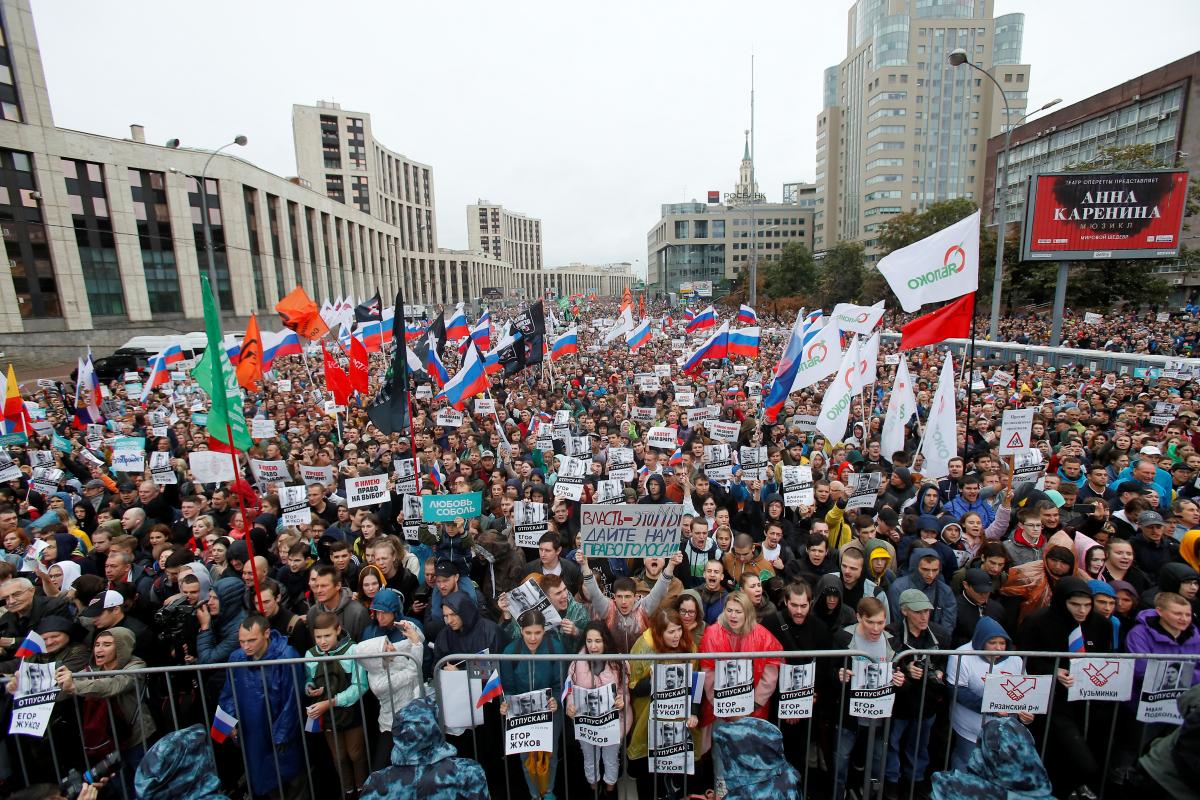 Tens of thousands of Russians staged what a monitoring group called the country's biggest political protest for eight years on Saturday, defying a crackdown to demand free elections to Moscow's city legislature.

Police rounded up scores of people after the demonstration in Moscow and at another rally in St Petersburg, and detained a leading opposition figure before it began. But the response from the authorities was milder than the previous week when more than 1,000 protesters were detained, sometimes violently, Reuters said.

The White Counter monitoring group said up to 60,000 people had attended the Moscow rally, describing it as the biggest in Russia for eight years. Police put turnout at 20,000.

A month of demonstrations over elections for the Moscow city legislature have turned into the biggest sustained protest movement in Russia since 2011-2013, when protesters took to the streets against perceived electoral fraud.

Crowds at the rally in Moscow roared "down with the tzar!" and waved Russian flags. They are demanding that opposition-minded candidates be permitted to run in a city election next month after they were not allowed onto the ballot.

"The authorities have become brazen. It's time to defend our rights," said Natalya Plokhova, a recruiting consultant.

As the scenes unfolded in Moscow, President Vladimir Putin was shown on state television in a leather jacket at a biker show organized by the Night Wolves motorcycle club on the peninsula of Crimea which Russia annexed from Ukraine in 2014.

Putin and the Kremlin have so far avoided commenting on the unrest over the Moscow city elections.

OVD-Info, a monitoring body, said 178 people were arrested at Saturday's demonstration in Moscow and 80 in St Petersburg. A small number of other arrests took place in other cities, including Rostov-on-Don and Bryansk.

The Moscow protest was held with official permission, unlike last week's demonstration. Afterwards, hundreds of mostly young people chanting "Putin is a thief" began gathering near the presidential administration building, prompting masked riot police to ring off the area and detain dozens.

Authorities had earlier warned protesters not to continue protesting after the officially authorized event. Until that point the rally had largely passed without major incident, apart from isolated police detentions and a smoke grenade set off nearby.

Ahead of the rally, police detained hunger-striking opposition activist Lyubov Sobol. Masked men raided her office and the police said they had information she and other activists were plotting a "provocation" at Saturday's rally.

"I won't make it to the protest. But you know what to do without me....Russia will be free!" Sobol wrote on Twitter.

Some pro-Kremlin politicians and officials have suggested that the West has helped orchestrate the protests. Kremlin critic Alexei Navalny and at least seven of his allies are in jail for breaking protest law.

Investigators have opened criminal proceedings against about a dozen people for what they say was mass civil unrest at earlier protests, a crime that carries a heavy jail term. They have also opened a money-laundering investigation into Navalny's anti-corruption foundation.

Throngs of protesters, sheltering from rain under umbrellas, chanted "freedom for political prisoners" and "Russia will be free". Several Russian musicians with youth followings, including rapper Face and electronic band Ic3peak, performed at the rally despite city authorities saying that would be banned.

The focus of protesters' anger is a prohibition on a slew of opposition-minded candidates, some of whom are allies of Navalny, from taking part in a September election for Moscow's city legislature. That vote is seen as a dry run for a national parliamentary election in 2021.

Authorities say the opposition candidates failed to collect enough genuine signatures to register. The excluded candidates say that is a lie and insist on taking part in a contest they believe they could win.

The ruling United Russia party's popularity rating is at its lowest since 2011 and President Vladimir Putin’s own rating has fallen due to discontent over falling living standards.

If you see a spelling error on our site, select it and press Ctrl+Enter
Tags:PutinpoliceprotestselectionsrallyoppositionMoscow