Serbia will remain neutral and will not introduce any kind of sanctions against Russia. 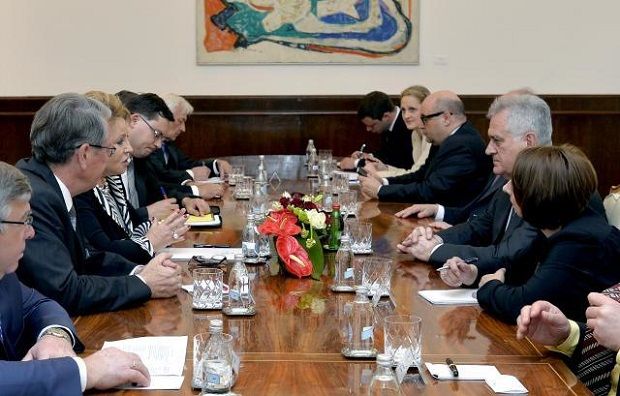 President Tomislav Nikolic announced this when meeting with Valentina Matviyenko, the head of the upper house of the Russian parliament, according to Belgrade-based news portal b92.net.

"We will preserve our stand that Russia and the EU should solve their disagreements through talks and we are ready to use Serbia's OSCE chairmanship to give our full contribution in order to reach a total solution to the crisis in Ukraine," Nikolic said, according to his press service.

Serbia has repeatedly demonstrated its unwillingness to join EU sanctions against Russia over Ukraine, although this is against its EU membership aspirations.

Born in Ukraine, Matviyenko, a former Governor of Saint Petersburg from 2003 to 2011, was among those members of the Russian parliament's upper house who unanimously voted on March 1, 2014, to approve Russia President Vladimir Putin's request for authorization to use Russian armed forces in Ukraine before Crimea was annexed by Russia.

On March 17, 2014, the next day after the so-called Crimean status referendum, Matviyenko became one of the first seven persons who were put by President Obama under executive sanctions. The sanctions freeze her assets in the US and ban her from entering the United States. Due to the Crimean crisis she was also put on the Canadian sanction list.

As UNIAN reported earlier, on March 19, 2015, the OSCE Presidency of Serbia and the OSCE leaders did not allow the opening of a photo exhibition, which Ukrainian and Lithuanian representatives wanted to dedicate to the anniversary of occupation of Crimea.