Earlier, 33 Turkish troops were killed in an airstrike by Russia-supported Syrian government forces. 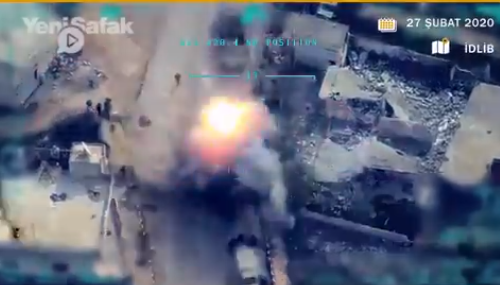 Videos have been posted on Twitter, shot by unmanned aerial vehicles showing what is reported to be massive strikes by Turkish air forces on enemy convoys, military hardware, and personnel in Syria's Idlib "de-escalation zone".

The move is seen as retaliation for the latest deadly air raid by Assad forces that killed at least 33 Turkish soldiers in the area.

As reported earlier by Anadolu, a rally was held February 28 outside Russia's consulate in Istanbul in protest against Russia's support for the Assad troops in Syria.

Turkey is convening on Friday an extraordinary NATO meeting in line with Article 4 of the NATO Treaty, according to Jens Stoltenberg, the Alliance chief.

The Syrian Air Force Mi-8/17 was shot down by MANPADS in the province of #Idlib near Nairab-Qmenas. pic.twitter.com/eH4c50k8sI