Armenian president leaving Yerevan amid spreading protests in his country

President of Armenia Serzh Sargsyan is leaving Yerevan for Brussels, Belgium, on Wednesday evening on a working visit to attend a European People's Party (EPP) summit, which is scheduled for June 25. 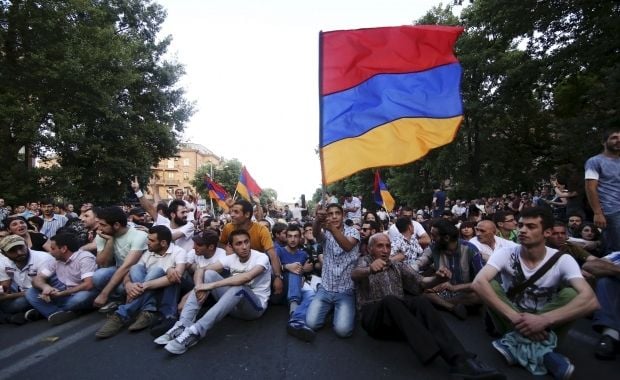 Sargsyan, who is leaving his country amid spreading protests, is scheduled to deliver a speech at the summit, his press service said; however, there is no information whether his speech will cover the recent developments in Armenia, according to Radio Svoboda.

Despite violent suppression by the Armenian police on June 23, a protest rally against an increase in power rates in Armenia was under way in Yerevan on June 24.

Deputy Chief of the Yerevan police Valeriy Osipyan said that the rally was "illegal" and announced that all detained during the dispersal of the previous protest rally had been released.

At dawn on June 23, the police dispersed a rally, which began on Monday, June 22, at the initiative of the "No Robbery" movement. The police used water cannons. Participants in the rally were protesting against a 16% increase in electricity tariffs in Armenia as of August 1.

After Yerevan, a local rally began in Vanadzor, Ashtarak and Abovyan, while a sit-down protest is under way in Gyumri now, according to Armenia Today.

Speaking at a meeting of the Federation Council of the Russian Federation, Senator Nikolai Ryzhkov said that the rallies in Armenia resembled those during Ukraine's Maidan events with the Revolution of Dignity November 2013 through February 2014, but those in Armenia were provoked by Russian businesses' increase in tariffs.