Over half a million refugees and migrants have arrived by sea in Greece this year and the rate of arrivals is rising with over 8,000 coming on Monday alone, in a rush to beat the onset of freezing winter, the United Nations said on Tuesday, according to Reuters. 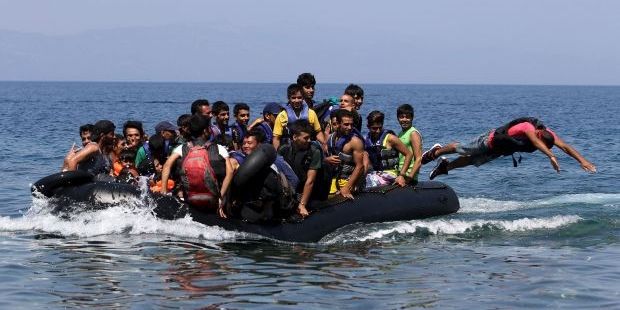 U.N. refugee agency spokeswoman Melissa Fleming said 27,500 people remained in transit on Greek islands near Turkey, many voicing fears that borders ahead of them in northern Europe will close again, although migrants were passing from Croatia into Slovenia after Hungary sealed its frontier with Croatia, the report says.

"We have reached another dramatic milestone, with the arrival yesterday (Monday) of 8,000 people, bringing the total to 502,500. Obviously we knew this was coming, but we do see a spike in arrivals in Greece," Fleming told a news briefing.

In all, more than 643,000 refugees and migrants from the Middle East, Africa and Asia have crossed the Mediterranean to Europe this year and at least 3,135 have died en route, according to the U.N. High Commissioner for Refugees.

Most are refugees needing protection from war and persecution, including Syrians, Iraqis and Eritreans, the UNHCR says.

"We are reporting 25 deaths in the Aegean (Sea) this week, many of them children," said Joel Millman of the International Organization for Migration (IOM).

People smugglers are offering "discount rates" to some passengers leaving Turkey but are packing ever more people onto each boat, making conditions even more dangerous, Fleming said.

"Obviously Greece is doing what it can, it's pulling in additional police. But we need to repeat over and over again that it is of utmost importance here that reception conditions be established and be adequate to this enormous task," she said.

"Without this essential element, the relocation program that was agreed by Europe in September is in serious peril and may fail. One system can't work without the other."

She was referring to a European Union program to distribute 160,000 asylum seekers from Italy and Greece to other participating EU countries. So far only a first group of 19 Eritrean asylum seekers has gone to Sweden from Italy.

Migrants continue to stream north through the Balkans from Greece but Hungary shut its border with Croatia on Friday and Slovenia imposed daily limits on migrants entering from Croatia, holding up thousands on cold, rain-sodden frontiers.

Slovenia said on Tuesday it would deploy the army to help guard its border and appealed for help from fellow members of the European Union.

By late morning on Tuesday, 5,000 migrants had entered Slovenia from Croatia, after some 8,000 on Monday, Slovenia's Interior Ministry said. But a ministry official said "we cannot exclude the possibility of safeguarding border crossings with physical obstacles" if the influx escalated.

"Those borders, the Croatian border, the Slovenian border, have reopened and you've all read what some people suffered through... People were just soaked to the bone, it was raining, it was cold, it was miserable," Fleming said.

"This is probably a little curtain-raiser for what is to come in the winter months that are going to be even colder and even more miserable."