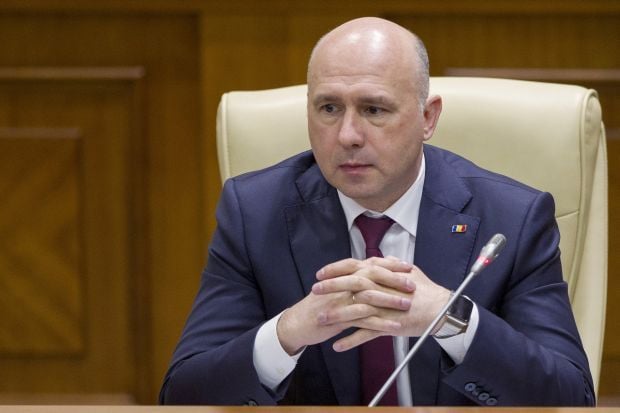 Speaking to the BBC, Filip acknowledged that the political class had a last chance to restore trust.

But he warned he would crack down on any violent protests.

More than 20,000 people demonstrated in the capital, Chisinau on Sunday. They object to Filip's links to powerful oligarchs.

Moldova has been wracked by political crisis after $1 billion (GBP 700 million) – equivalent to an eighth of the ex-Soviet republic's entire GDP – was found to be missing from Moldovan banks last January.

But in his first interview with international media, Filip told the BBC's David Stern that his stepping down could harm the country.

"We could find ourselves in a deep economic and social crisis. It's possible that Moldova wouldn't be able to pay salaries and pensions for four months," he said.

Filip was elected by parliament under controversial circumstances last week.

His election came after former prime minister Vlad Filat was arrested over the bank fraud and his successor Valeriu Strelet was dismissed in a no-confidence vote in October.

However both pro-Western and pro-Russian groups accuse him of using a pro-EU stance to hide corruption.

Filip admitted that Moldovans had little confidence in their leaders and appealed for more time.

"We understand that people won't believe any more populism. And I ask the protesters and our international partners: Judge the tree not by the roots, but by its fruits," he said.

However, he insisted Moldova would not soften the reform program set out under the accession agreement it signed with the EU in 2014.

And he vowed that there would be no tolerance for violent protests after some demonstrators blocked roads into the capital on Sunday.

"Any action from the protesters that could be considered a violation of the law will be punished," he said.