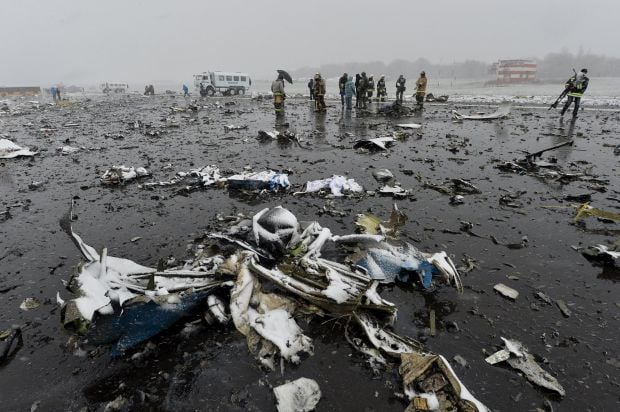 "We are finalizing work on putting together protocols of 2-hour sound information from the recorder onboard," the committee said. The specialists will verify the contents, translate speech from the English and Spanish languages and will verify the speakers," IAC said, according to TASS.

"The IAC laboratory will involve for this work experts from the UAE, the U.S. and Spain," the committee said.

"According to the preliminary analysis of the information from black boxes, the aircraft's crew was trying to land in the manual mode (autopilot was turned off) in difficult weather conditions (lower boundary of clouds at 630m, winds at 13 m/s with gusts of up to 18 m/s, slight rain showers, haze, strong turbulence and moderate wind shift)," IAC said in a statement published on its official website on Friday.

Read alsoElevator system malfunction: new version of Rostov crash"When trying to land, the crew received information from the board system about the 'wind shift' (strong changes of force and direction of winds) and decided to make another approach, afterwards flying near the airport awaiting for improvement in weather conditions," IAC said.

Flydubai's Boeing 737-800 crashed at Rostov-on-Don's airport in the small hours on March 19 during a second attempt to land in complicated weather conditions of strong side wind and rain. The plane served regular Flight FZ 981 from Dubai. The passenger jet capable of carrying 189 passengers had 62 people onboard, including the crew. None survived. The investigation looks into several versions of the air crash: a pilot error, a technical malfunction, bad weather conditions and others.