Donald Trump and Hillary Clinton won their New York presidential primaries Tuesday, ending losing streaks for both campaigns and allowing the two front-runners to reassert control over their party nominating fights, according to Bloomberg. 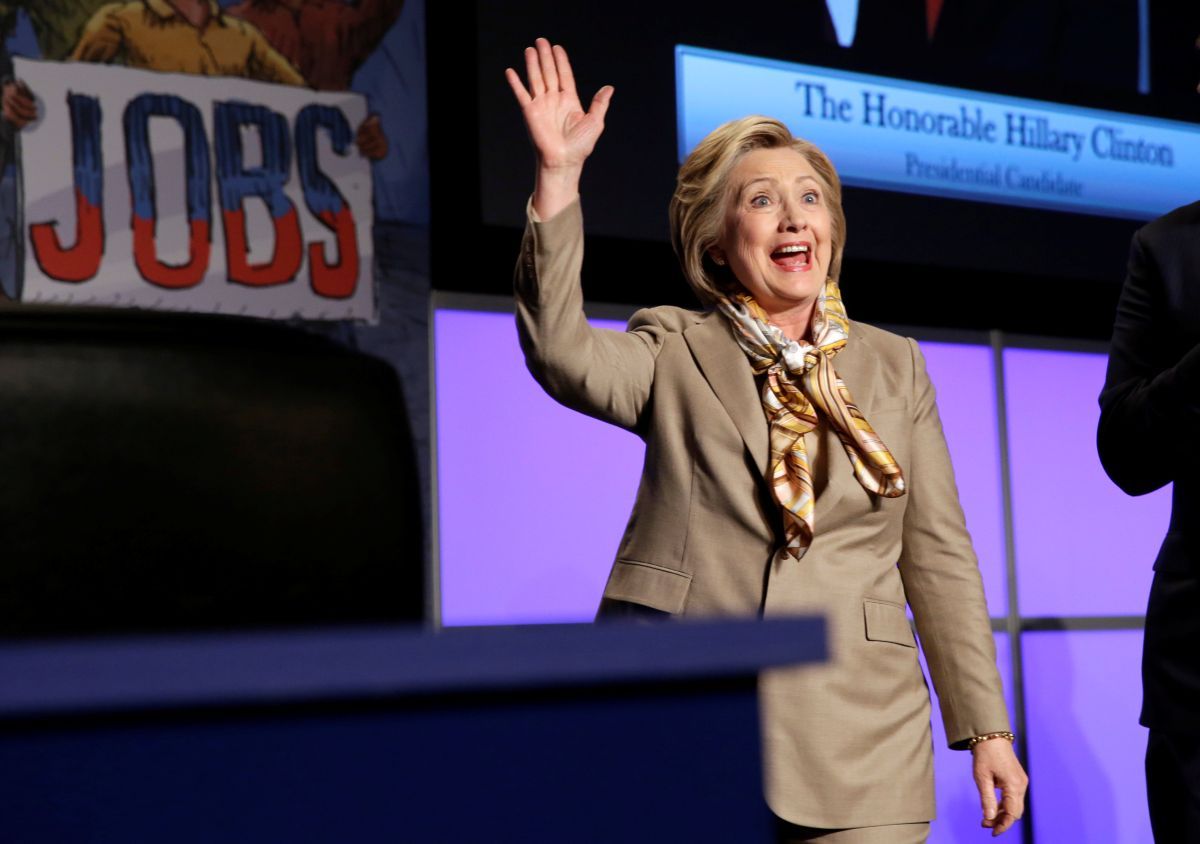 Clinton's victory makes her march to the nomination all but unstoppable, Bloomberg wrote.

Sanders, a Vermont senator, will determine his path forward in the campaign after five Northeastern primaries on April 26, aides said, contests where the former secretary of state is favored.

"We constantly assess things," Sanders adviser Tad Devine said via a text message. "He has made a decision to continue the race until every voter has had the chance to vote in June and that remains unchanged." 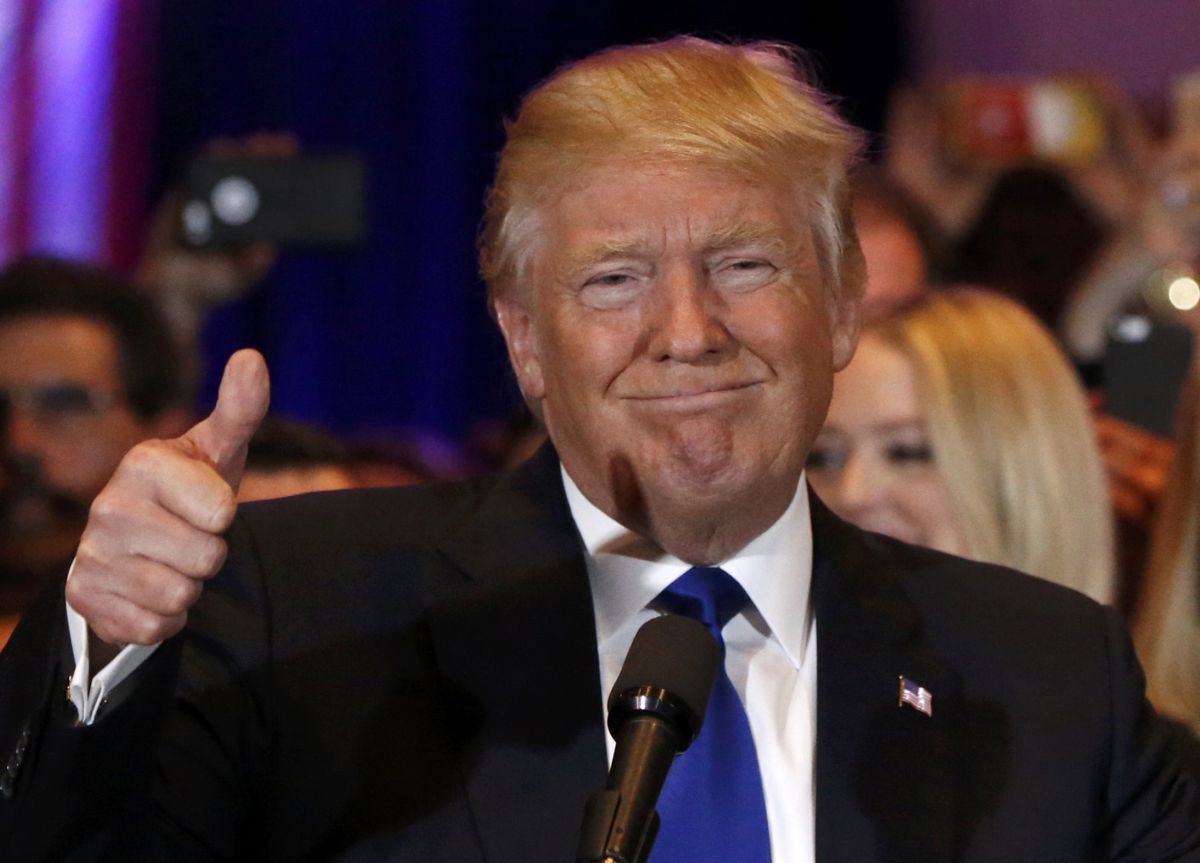 Trump, the billionaire real-estate mogul, got a major boost in his quest to secure the Republican nomination with a majority of delegates but could not eliminate the possibility of a contested convention. He won at least 89 of New York's 95 Republican delegates, according to the Associated Press.

Trump was projected as the winner in his home state by the television networks immediately after the polls closed, beating Ohio Governor John Kasich and Texas Senator Ted Cruz. The victory marks a rebound for Trump after a difficult few weeks of gaffes, campaign upheaval and a loss in Wisconsin on April 5.

Speaking at his Trump Tower in New York after he was projected the winner, Trump thanked his supporters and said Cruz is "just about mathematically eliminated" from the race for the Republican nomination. The AP also said Cruz cannot possibly collect the required 1,237 delegates before the convention.

"We don't have much of a race anymore, based on what I've seen,'' Trump said. "We're really, really rocking."

Trump's delegate gain is boost for his efforts to secure the majority needed before July to avoid a convention fight in Cleveland.

Speaking in Philadelphia before polls closed, Cruz dismissed Trump's victory in the New York primary as "a politician winning his home state." Striking a new tone, he said in a 12-minute speech that millions of Americans have decided they want an "outsider" like him and Sanders.

The New York primary "cemented the fact that" Cruz cannot secure the nomination outright before the convention, John Weaver, Kasich's chief strategist, said in a memo on Tuesday night. Kasich is trying to force a contested convention, where he will seek to win the nomination despite trailing in delegates, as the only candidate who can beat Clinton and unite the party.

In the Democratic fight, Clinton's communication director Jennifer Palmieri had sharp words for Sanders Tuesday night. "He needs to decide, and as she closes out the Democratic primary, if he's going to continue on the destructive path that he started down in the New York primary, where he is making personal character attacks on her that mimic the attacks that Republicans make and aid Republicans, or if he is going to end this primary the way that he promised, to run the kind of campaign he said he would that is focused on issues."

Sanders returned to Vermont for the night to "get recharged and take a day off," he said, before returning to the campaign trail in Pennsylvania on Thursday. While Sanders lags Clinton in votes and delegates, he had surged over the past several weeks, winning seven of the eight primaries and caucuses and attracting crowds of as many as 28,000 at rallies in New York.

An upset in the Empire State would have tarnished Clinton's status as the clear front-runner for the Democratic nomination. But Clinton emphasized her New York ties and ability to deliver results for the state as U.S. senator to come away with a convincing win.

Clinton now is looking to the primaries April 26 in Pennsylvania, Delaware, Rhode Island, Connecticut and Maryland, after which her campaign hopes to have accumulated a lead in delegates that would be almost impossible for Sanders to overcome.

"The race for the Democratic nomination is in the home stretch, and victory is in sight," Clinton said at her primary night event in New York.

Clinton has said her lead in pledged delegates over Sanders is larger than the advantage Barack Obama ever had over her in their 2008 primary fight. Including superdelegates -- party leaders and officials who are free to change their support -- Clinton leads the delegate race 1,893 to 1,180, with 2,383 needed to clinch the nomination, according to an Associated Press tally. New York has 291 Democratic delegates.

Sanders campaigned hard in New York, knowing the Empire State would be critical leading into the contests in the Northeast on April 26. He was expected to spend a total of $6.6 million in New York on TV and radio ads, while Clinton was slated to spend $4.2 million, according to Kantar Media's CMAG, which tracks political commercials.

"It was make-or-break for him to win,'' said Joe Trippi, a Democratic consultant who advised numerous presidential campaigns. "There's a chance on the 26th that's going to start slamming the door on him.''

Read alsoBBC: Clinton and Trump tighten election gripClinton's appeal to black and Latino voters helped propel her to victory, according to exit polls. She had the support of 75 percent of black voters and 63 percent of Latinos, the surveys showed. Sanders won 55 percent of voters ages 18 to 44, while Clinton carried 66 percent of those 45 and older.

Trump dominated all demographic groups in New York, including men, women, all age groups and voters both with and without a college degree, exit polls showed. The New York win for Trump might also help him in next week's primaries in the Northeastern states, when a total of 172 delegates are at stake.

Following the loss in Wisconsin, Trump scaled back his rallies and made changes in his campaign. He hired Rick Wiley, who had managed Wisconsin Governor Scott Walker's failed presidential campaign, to be his political director. He also added Paul Manafort, a veteran of the party's last contested convention in 1976, to lead his delegate effort.

"The last story was about the loss in Wisconsin and chaos surrounding the campaign," said Steve Schmidt, the chief strategist for John McCain's 2008 presidential campaign. "That has smoothed out over the last couple of weeks and gives him momentum heading into Pennsylvania and the Northeastern states."

Trump's rivals didn't try to defeat him in the Empire State. Rather, they targeted congressional districts where they could help keep his vote percentage down and pick up delegates.

The primary contest played out against a backdrop of voters' complaints of being told they couldn't cast their ballots, with some polling places opening late or equipped with malfunctioning scanners. City Comptroller Scott Stringer declared he would audit the Board of Elections after finding it had purged 1.4 percent of the city's voters from the 3.58 million total it had Nov. 1, including tens of thousands in Brooklyn.

"The people of New York City have lost confidence that the Board of Elections can effectively administer elections, and we intend to find out why the BOE is so consistently disorganized, chaotic and inefficient," Stringer said.

Mayor Bill de Blasio supported Stringer's audit and called upon the Board of Elections to reinstate the purged voters, using lists kept by the central office, not the one based in Brooklyn.

"The perception that numerous voters may have been disenfranchised undermines the integrity of the entire electoral process and must be fixed," de Blasio said.