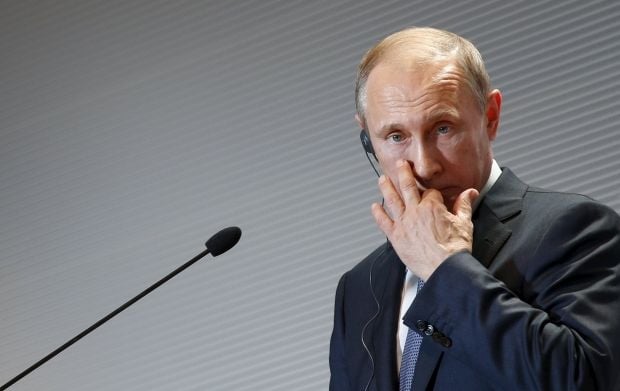 Members of St. Petersburg's Tambov crime syndicate moved into Spain in 1996, when Putin was deputy mayor of the former czarist capital, to launder proceeds from their illicit activities, Juan Carrau and Jose Grinda wrote in a petition to the Central Court on May 29, a copy of which was obtained by Bloomberg News, the article reads.

The 488-page complaint, the product of a decade of investigations into the spread of Russian organized crime during the Putin era, portrays links between the criminal enterprise and top law-enforcement officials and policy makers in Moscow. The petition, based on thousands of wiretaps, bank transfers and property transactions, is a formal request to charge 27 people with money laundering, fraud and other crimes. Approval by a judge would clear the way for a trial, but Spain doesn't try people in absentia.

The only Russian official facing possible charges is Vladislav Reznik, a member of Putin's ruling United Russia party and the deputy head of the finance committee in the lower house of parliament. The complaint, earlier reported by Spain's El Mundo and ABC newspapers, says Reznik helped the alleged leader of the enterprise, Gennady Petrov, get his associates appointed to key posts in Russia in exchange for assets in Spain. Prosecutors are seeking to confiscate a property they say Reznik owns on the resort island of Majorca.

"The criminal organization headed by Petrov managed to achieve a clear penetration of the state structures in his country, not only with the lawmaker Reznik but with several ministers,” the prosecutors say in the petition.

Putin himself is mentioned by name three times in the document, including in a partial transcript of a call between two alleged Tambov operatives in 2007. The men are discussing an issue with a hotel in the Alicante region and one refers to a house that he says Putin owns in nearby Torrevieja.

"This is total nonsense,” Putin's spokesman, Dmitry Peskov, said of the Spanish allegations. "It's beyond the realm of reason."

Reznik, in an interview in Moscow, denied any wrongdoing. He said his relationship with Petrov is "purely social" and that he would welcome the opportunity to travel to Spain and clear his name if a trial takes place.

While accusations of graft are not uncommon in Russia, which is tied with Nigeria in Transparency International's corruption perception ranking, few investigations have identified so many senior officials by name. The highest-ranking person publicly sanctioned under the U.S. Magnitsky Act, enacted in 2012 to punish Russians deemed complicit in the prison death of an accountant who alleged large-scale theft by officials, is a deputy general prosecutor.

Petrov was an early shareholder in Bank Rossiya, the St. Petersburg lender set up by some of Putin's oldest allies and the first company sanctioned by the U.S. after Russia annexed Crimea from Ukraine. Spanish police arrested Petrov during a raid on his Majorca villa in 2008. He was later allowed to travel to Russia but never returned. Russia doesn't allow the extradition of its citizens.

A lawyer for Petrov, Roberto Mazorriaga, said by e-mail that prosecutors haven't provided any evidence to support their allegations.

Investigators in Spain have been at the vanguard of the fight against Russian organized crime, warning fellow NATO members for years of the dangers posed by what they call state-sanctioned syndicates, an issue that's become more acute since the conflict in Ukraine rekindled Cold War distrust.

After a briefing by Grinda, one of the prosecutors, in Madrid in 2010, U.S. officials concluded that Putin runs a "virtual mafia" state where the activities of criminal networks are indistinguishable from those of the government, according to a classified cable from the U.S. embassy in the Spanish capital that was published by WikiLeaks.

Russian security services control criminal groups and use them to do things the government "cannot acceptably do," Grinda was cited as telling U.S. officials at the time. One mafia leader in Spain was actually a Russian intelligence officer tasked with "selling weapons to the Kurds to destabilize Turkey," the embassy said in the cable.

A lawyer for the widow of dissident Russian agent Alexander Litvinenko, who died of radioactive poisoning in London in 2006, in January accused senior officials in Moscow of ordering Litvinenko's death in part to prevent him from helping Spain root out Russian criminal networks.

The Kremlin has repeatedly denied having anything to do with Litvinenko's murder. In March, Putin awarded a medal to the chief suspect in the ongoing U.K. probe, fellow KGB veteran Andrei Lugovoi, who's now a member of parliament, for "services to the fatherland."

Petrov used Spain as a base to carry out criminal activities mainly in Russia, including murder, arms trafficking, drug smuggling, extortion and fraud, the prosecutors say, repeating some of the accusations that led to his 2008 arrest. Political and judicial contacts in Russia offered him help, including advice on his personal safety; inside information about business dealings; the threat posed by other criminal groups; planned actions against organized crime; and the amount of influence he needed to exert, they say.

His network in Moscow, according to the document, includes Viktor Zubkov, the chairman of gas exporter Gazprom who was prime minister and first deputy premier from 2007 to 2012, and Zubkov's son-in-law, former Defense Minister Anatoly Serdyukov.

Serdyukov "does business with Petrov" and Zubkov, who worked for Putin in the St. Petersburg government in the early 1990s, "favored Petrov's organization with some political decisions," the prosecutors say, without elaborating. Serdyukov's lawyer, Genrikh Padva, declined to comment and Zubkov didn't respond to a request for comment sent through Gazprom's press service. Neither man is facing indictment.

Other officials mentioned as being "directly related" to Petrov's group include Deputy Prime Minister Dmitry Kozak and Alexander Bastrykin, who runs the powerful Investigative Committee that oversees major criminal inquiries. Bastrykin and Putin both earned their law degrees from Leningrad State University in 1975. Kozak graduated from the same law school a decade later and worked in City Hall at the same time as Putin.

Kozak -- about whom no detail is provided in the complaint -- said he only knows of Petrov through media reports, according to his spokesman, Ilya Djous. Bastrykin's committee said in a statement that it didn't have any information corroborating the reported information of Spanish prosecutors.

Another senior Russian official at the time, Leonid Reiman, who was communications minister and a Kremlin adviser from 1999 to 2010, was a business partner of Petrov's, the prosecutors say. Reiman has "no ties" to Petrov, OAO Angstrem, a technology company in Moscow that Reiman is chairman of, said by e-mail.

Petrov, 67, was an influential figure in St. Petersburg during the chaos that followed the collapse of the Soviet Union in 1991 and knew many of the city's political elite, including Zubkov, Bastrykin and Kozak, two people who knew him at the time said on condition of anonymity.

Petrov proved to be influential in Moscow under President Putin, too, the Spanish prosecutors say. When Putin created the Investigative Committee as a counterweight to the Prosecutor General's Office in 2007, Petrov helped secure Bastrykin's appointment as its first chairman, they say, citing wire taps of calls between Petrov and one of Bastrykin's future deputies.

Another law-enforcement official, Nikolai Aulov, is "one of the most important persons for Petrov" in Russia, according to the document. Aulov is a deputy of Viktor Ivanov, who runs the Federal Narcotics Service and is a former KGB colleague of Putin's in Leningrad and later St. Petersburg.

Investigators logged 78 phone calls between Aulov and Petrov. In March 2008, according to the complaint, Petrov asked an associate to get Aulov to pressure Russia's new customs chief to facilitate port shipments for his group.

The drug agency's press service referred requests for comment from Aulov and Ivanov to an interview Ivanov gave to the Kommersant newspaper this month. In it, Ivanov said he doesn't know what "dirty political games" the Spanish are playing because Aulov helped bust a criminal gang led by Petrov in St. Petersburg in the early 1990s.

"This Petrov probe could change the narrative of Putin in the West -- from being a Stalinist tyrant defending the interests of his country to being a product of gangster Petersburg who united authorities with organized crime," said Stanislav Belkovsky, a Kremlin adviser during Putin's first term who consults at Moscow's Institute for National Strategy.