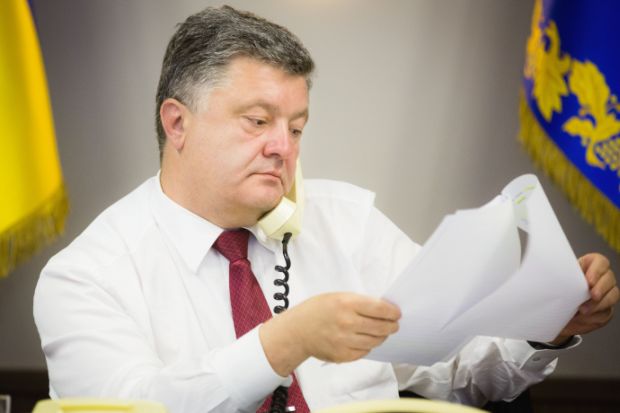 The leaders discussed the results of the last meeting of the Tripartite Liaison Group and its four sub-groups, which took place on July 21 in Minsk.

Poroshenko noted the deteriorating situation in Donbas, in particular an increase in the number of militant attacks.

The parties also noted the need to ensure proper monitoring and verification of the ceasefire by the OSCE Special Monitoring Mission (SMM) to Ukraine and supported the initiative of the President of Ukraine concerning the immediate signing of the Tripartite Liaison Group agreement on withdrawal of tanks, 100mm artillery and mortars.

In addition, Ukrainian President stressed the need for the release of all the hostages, including illegally detained persons in Russia, in particular, Nadia Savchenko.

The parties welcomed the decision reached in the framework of the Tripartite Liaison Group on the restoration of damaged water infrastructure and railways.

Particular attention was paid to the urgent establishment of humanitarian and logistic centers along the demarcation line, where the Ukrainians from the militant-occupied territories would be able to buy food and medicines at affordable prices.

The leaders also discussed the forthcoming elections in some regions of Donetsk and Luhansk regions. In this context, Poroshenko condemned the pseudo-elections, scheduled for October 18 and November 1 by militants, saying these so-called elections would bear no legal consequences.

Poroshenko, Merkel, Hollande and Putin also agreed to speed up the conclusion of agreements in the Ukraine-EU-Russia format on deliveries of Russian gas to Ukraine.