How Russian television transformed into a ‘propaganda machine’ 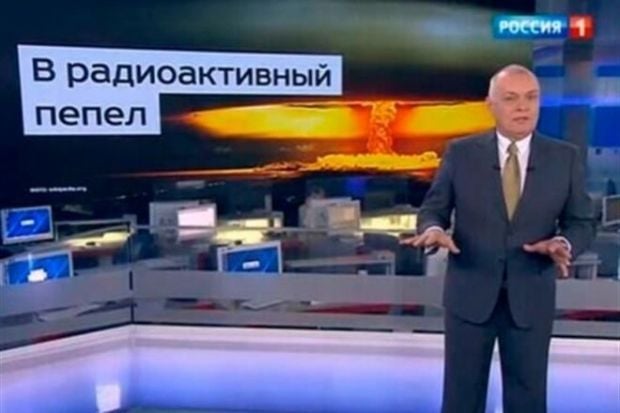 “We were told a new era was underway that made the 1970s and 1980s look like child’s play,” says Colta’s first subject, a former employee of the All-Russia State Television and Radio Broadcasting Company (VGTRK), reminiscing of the moment when the staff was gathered together at a meeting in February 2014 and informed that a new Cold War had begun. “So anyone who didn’t want to pitch in could find themselves another job outside the news industry,” said the source, according to Meduza.

Those who chose to stay had the most banal reasons: “Their families. Their debt. Plus, everyone knew there was nowhere else to go”. According to the former employee, half the staff was “absolutely disgusted” by their own work, while roughly a quarter of the people, he says, simply didn’t care.

Read alsoIndependent Russian journalists fear levers of KremlinAccording to Colta’s source, VGTRK never once debated how to cover the events in Ukraine, and it never even considered reporting the viewpoints of people who opposed Crimea’s reunification with Russia. With the beginning of the crisis in Ukraine, competition between the television stations came to a halt: “A collective propaganda organism emerged.”

Colta’s second source, a former employee of VGTRK’s news broadcasting unit, says meetings attended by the heads of the Russian mass media were held every Friday at the Kremlin. Every TV station’s chief editor “received a printed plan where everything was written down about how, what, and whom to invite on the air as an expert”.

Read alsoU.S. to grant $500,000 to counter Russian propaganda in Baltic States“There is a general tendency to escalate that they [Ukrainians] depend on us. ‘Now we won’t send you any gas, and you’ll all freeze!’" the source says of VGTRK’s approach.

A third source, a producer at REN-TV who quit a year ago, says the image of [Russia’s] enemy changed with the crisis in Ukraine. “Before those infamous events, our main enemies were various Rothschilds, Morgans, and others identified by conspiracy theories about global capitalism—figures who [supposedly] hounded us with bad food and fluctuating oil prices. When everything started in Ukraine, the enemy ceased to be abstract; it became something concrete,” the man told Colta, comparing Russian journalists directly with prostitutes.

Colta’s only source willing to have his name printed is TVTs producer Stanislav Feofanov, who worked at REN-TV on the show “Nedelya” with Marianna Maximovskaya, when the Ukrainian crisis began. “Nedelya” were always given the opportunity to cover both sides of the conflict, according to Feofanov who claimed he had never encountered any direct censorship. “But it was clear that the show was hanging by a thread,” Feofanov says, “and so its cancellation was no surprise. When MH17 was shot down, it became impossible to do the news the way we did it. On every channel, there was only screaming about the junta in Kiev—the “punishers”—who shot down the plane.”