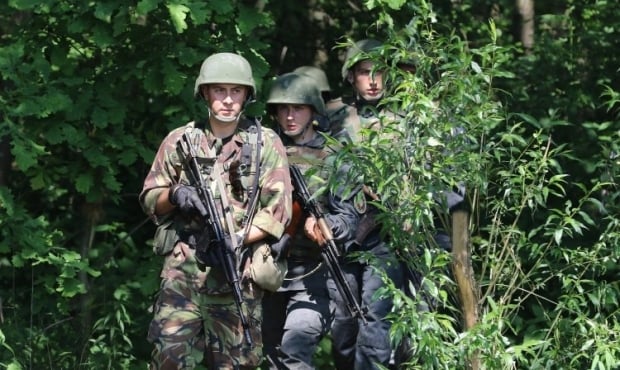 U.S. troops and Ukrainian troops learning from each other seems to be just the kind of thing that Russian President Vladimir Putin was worrying about when he called an emergency meeting of his security council on Wednesday, according to the Daily Beast.

The Ukrainians brought stories from the front about the enemy, the arms, and the firepower used against Ukrainian troops. For American soldiers, listening to these members of former Soviet forces talking about their adversaries, also from the former Soviet army, this has been an education. It has given them a chance to study in granular detail a great deal about the evolution of Russian combat forces in the last quarter-century.

As the pace of fighting in eastern Ukraine picks up (with each side blaming the other, as usual), one of Moscow’s stated concerns is about Ukraine’s new defense doctrine, officially released this week.

Russian Security Council Secretary Nikolai Patrushev told journalists it “provides the United States and NATO with an opportunity to use Ukraine’s resource base and provokes further escalation in the southeast of the country.” Kyiv’s doctrine includes major military reforms and names Russia as the most dangerous enemy. The U.S., British, Polish, Canadian, and other NATO military forces drilling with Ukrainian forces this summer are a strong signal for Putin and his closest circle that the West is ready to be involved in a military conflict. They may also give him a pretext to raise the stakes in Ukraine’s eastern region, known as Donbas.

Rival exercises in other areas by NATO and the Russians represent the biggest buildup in military tensions with Moscow since the Cold War, according to many analysts. And Putin seems to relish the confrontation, even when his security cabinet recommends caution.

When the Russian independent radio station Echo of Moscow conducted a survey after Putin’s security council meeting asking whether the station’s listeners believed there could be a direct military conflict between Russia and the West, 43 percent of the audience said, “Yes.”

For the U.S. military, this is “a mission of high responsibility to train soldiers to fight for their country’s sovereignty,” said one of the U.S. instructors at Yavoriv training center in Western Ukraine. Since April 2014, the Ukrainian military has lost more than 2,495 soldiers, killed by Russian-backed rebel forces. “We have never had such bad casualties in one year"(....) “We rarely or never saw massive forces backing our enemy, we have not faced numerical superiority, so we can take lessons from Ukrainians, ask them how they apply skills in different situations.”

The Ukrainian soldiers are grateful, especially for the equipment the U.S. military has provided, including long-range radars, drones, and night vision equipment, Ukrainian National Guards officer Vadim Perepichka told The Daily Beast on Wednesday. “The most useful experience I had during my two months with the U.S. Army’s 173rd Airborne Brigade was the night program, when we learned to conduct special operations wearing night vision goggles,” Perepichka said as he headed back to the front lines.

Moscow has complained frequently about the “provocative” presence of the U.S. paratroopers in Yavoriv, blaming Washington for threatening the peace. “With a smokescreen of claims about an alleged presence of Russian troops in Donbas, Washington is trying to divert the international community’s attention from its military deployment in Ukraine,” the Russian Foreign Ministry spokesman, Alexander Lukashevich, said in a statement last April. “It’s obvious that the U.S. troops on Ukrainian soil won’t bring it peace.”

By July the number of foreign military on Ukraine’s soil had increased to 1,800 soldiers. The exercises were organized by International Peacekeeping and Security Center in the Lviv region and focused on defensive operations as well as integrated command posts for units from 18 countries.

Once again Moscow was angry: “The military drills involving NATO members and Ukraine’s army that started in Lviv region under U.S. command are a clear demonstration of NATO’s provocative policy to unequivocally support the policies of the current Kyiv authorities in eastern Ukraine,” the Foreign Ministry said in a statement.

Both for Ukrainian society and the professional military, it is important that the world has pulled together to support Ukraine, the country's Defense Ministry spokesman Oleksandr Poronyuk told The Daily Beast. “Russian leadership knows perfectly well that we have had joint military exercises with NATO for 20 years here outside Lviv. This is the biggest training field in Europe; it can be useful for any NATO member, and for our military it is important to develop from the army of the fifth generation, like the Russian army, to the army of the seventh generation, like they have in the U.S,” Poronyuk said.

By the end of the program about 500 Ukrainian National Guards are to be trained by the U.S. military. British Defense Minister Michael Fallon also said Tuesday that British veterans of wars in Iraq and Afghanistan were planning to train more than 2,000 Ukrainian soldiers by the end of this year.