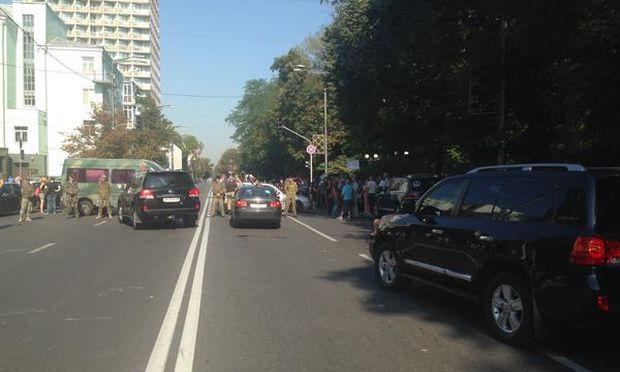 Law enforcers warned the protesters on the responsibility for blocking transport communications and take all measures for the resumption of traffic, the press service of the Main Office of Kyiv police told an UNIAN correspondent.

"Activists stopped their vehicles on the roadway in the government quarter, so the traffic is blocked on Hrushevskoho Street from the House of Parliament to the House of officers," the police said.

Also ahead of the session opening, the lawmakers from the Radical Party blocked the rostrum of the Verkhovna Rada, according to RP deputy Andriy Lozoviy.

"We blocked the presidium of the parliament, to prevent the special status of Donbas," Lozoviy wrote on Facebook.

"We call on fellow patriots to join! Today, the fate of the country is being decided," said Lozoviy.

Read alsoUSA backs Ukraine's decentralization efforts - BidenAs UNIAN reported earlier, today an extraordinary meeting of the Verkhovna Rada was to begin at 11:00 Kyiv time, to consider the bill on amendments to the Constitution of Ukraine regarding decentralization of power.

It was also reported that the press box in the Verkhovna Rada was closed and the journalists were not allowed to enter.

As of now, Rada speaker Volodymyr Hroysman has opened the meeting.