Poroshenko: Ukraine and Austria will have new trade opportunities 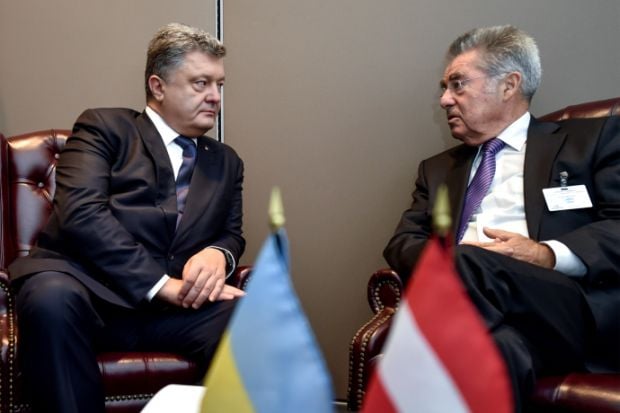 Poroshenko and Fischer discussed the implementation of the Minsk agreement / Photo from president.gov.ua

Poroshenko announced this at a meeting with Federal President of the Republic of Austria Heinz Fischer in the UN General Assembly building in New York on Monday.

The Ukrainian president praised Austria's completion of the internal procedures for the ratification of the Ukraine-EU Association Agreement.

In this context, it was agreed that the Austrian business mission headed by the Minister of Foreign Affair would be sent to Ukraine.

Fischer in turn welcomed Ukraine's decision to exclude Austria from the list of countries for the control over transfer pricing.

The parties also discussed the implementation of the Minsk agreements. It was emphasized that the democratic world must keep pressure on Moscow to ensure an absolute ceasefire and create conditions for the speedy reintegration of the occupied territories under the full sovereignty of Ukraine.

Fischer assured of his willingness to further provide humanitarian assistance to the Ukrainian citizens who have suffered from hostilities in the Anti-Terrorist Operation zone in eastern Ukraine.