The Trilateral Contact Group consisting of representatives from Ukraine, the OSCE, and Russia has signed an agreement in Minsk on the withdrawal of weapons whose caliber is smaller than 100 mm from the contact line in Donbas, Ukraine's east, according to Darka Olifer, the press secretary of former Ukrainian President, Ukrainian envoy Leonid Kuchma. 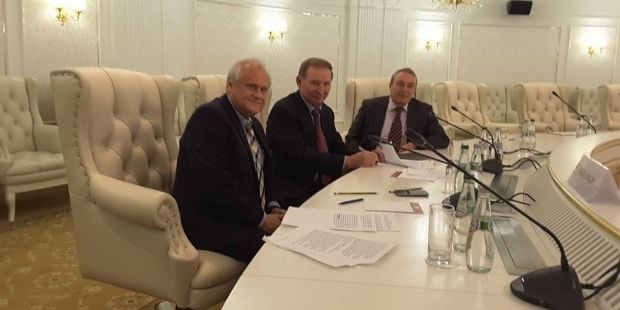 The Trilateral Contact Group in Minsk / Photo from Dariia Olifer

"The document was signed by [OSCE Special Representative in Ukraine] Martin Sajdik, Leonid Kuchma and [Russia's representative] Azamat Kulmukhametov," she wrote on Facebook on Tuesday evening.

An initiative announced by Ukrainian President Petro Poroshenko in continuation of the Minsk accords of September 5, 2014 and February 12, 2015, has thus become reality, she wrote.

In her words, Ukraine also demands that militant-held districts in Donetsk and Luhansk regions should immediately and strictly abide by these agreements as an integral part of the Minsk accords.