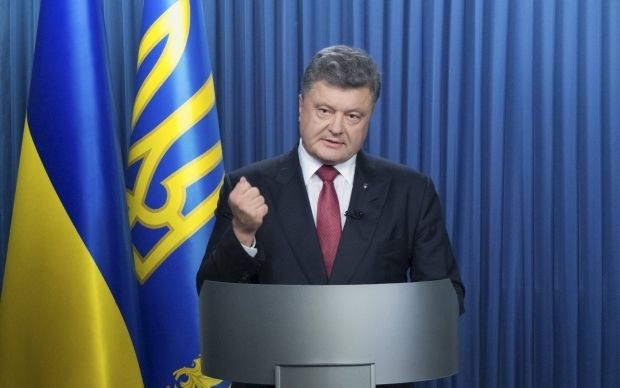 "We suggested holding negotiations within the Trilateral Contact Group to clearly define the content, wording and preliminary conditions stipulated in the Ukrainian legislation and guaranteed by the Ukrainian Constitution. Unfortunately, they have chosen a different path and blackmail Ukraine with new dates of the elections again. Ukraine sees such blackmail as inadmissible," the president said during his working trip to Luhansk region, the presidential administration said.

According to Poroshenko, attempts to announce new dates of the sham local elections in Donbas will only translate into toughening the sanctions.

"Instead of dialogue on the elaboration of a law [needed to hold local elections in Donbas under Ukrainian legislation], these attempts to declare new dates of the fake elections will lead solely to the prolongation and enhancement of the sanctions. I think nobody is interested in that. That's why I emphasize once again – Ukraine's position is clear and transparent. All Minsk agreements must be fulfilled. Yes, we observe the ceasefire at the moment. Yes, the artillery of caliber less than 100 mm, tanks, mortar launchers and cannons are being withdrawn. It is being done to make this truce sustainable," the president said.

Poroshenko insisted that Ukrainians held captive in occupied territory in Donbas and Russia must be released and the OSCE Special Monitoring Mission (SMM) should have access to all areas in the occupied territory.

"Troops must be withdrawn. The OSCE SMM activity must be ensured. It was clearly agreed in Paris that OSCE observers will have access not only to the buffer area, but also to the entire occupied territory including the Ukrainian-Russian border. We demand the immediate fulfillment of this condition. And unfortunately, the blackmail hinders the Minsk agreements, rather than promotes them," he said.