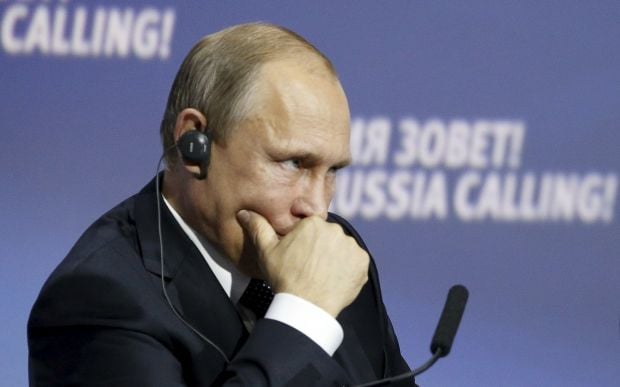 “Putin wants sanctions lifted as soon as possible, so he’s showing readiness to implement Minsk II,” Lozhkin said in an interview in Kyiv, referring to the second truce agreement Ukraine reached with rebel leaders and Russia, in neighboring Belarus in February, according to Bloomberg.

If the accord holds, Ukraine will meet one of Russia’s key demands -- passing constitutional changes giving regions more autonomy -- but probably not until December, when Putin’s intentions become more clear, Lozhkin said.

“We’ll only know in a month or two if Putin’s readiness for peace is real, but the situation is much more safe now than it was just a month ago,” he said.

Russia, which has been hit both by sanctions and oil’s plunge, is in the midst of a recession that will probably be the longest of the Putin era.

Ending sanctions is clearly one of Putin’s goals, so he’s decided to “de-escalate the conflict,” according to Gleb Pavlovsky, a political analyst who advised the Kremlin during Putin’s first two terms.

“And now he’s switched focus to the Syrian operation,” Pavlovsky said by phone from Moscow. “This has handed Poroshenko a lifeline because he needed Putin to think up a graceful exit from the Ukrainian conflict that would allow Kiev to claim victory.”

Lozhkin said Poroshenko is confident he’ll be able to persuade parliament to back the so-called decentralization amendment that Putin is insisting on with the required two-thirds majority, or at least 300 of 450 members, but it won’t be easy. Clashes erupted outside parliament in August after 265 legislators approved a preliminary version of the bill, leaving three policeman dead and more than 100 people wounded.

The law will apply to all regions, not just Donetsk and Luhansk, and be a catalyst for economic growth by reducing corruption and red tape, according to Lozhkin, a multimillionaire who sold his media group, Ukraine UMH, to an ally of Viktor Yanukovych before the former president was driven from power amid bloody protests last year.

“Each territory should be as independent economically as possible,” he said.

The government in Kyiv is demanding that polls in Donetsk and Luhansk be held completely under Ukrainian law to ensure a new, legitimate power. Once that happens, Ukraine will be able to take back control of its Russian border with the help of the Organization for Security and Cooperation in Europe.

“Firstly, the OSCE mission has to get access to the uncontrolled parts of the border, and then to transfer superintendence over these areas to the Ukrainian Border Guard after new local authorities are elected,” Lozhkin said.

Volodymyr Fesenko, a political analyst at the Kyiv-based Penta research institute, said Ukraine may be benefiting from Putin’s decision to join the war in Syria, but authorities “shouldn’t relax” because Russia will never abandon the separatists.

Read alsoSyrian bear trap for Putin"This is a demonstration of Putin’s diversified game with the West -- playing war in Syria while playing peace in Ukraine,” Fesenko said.

Poroshenko knows Putin too well to ever let his guard down, according to Lozhkin.

“For the Russian president, Ukraine will be in focus forever,” he said.