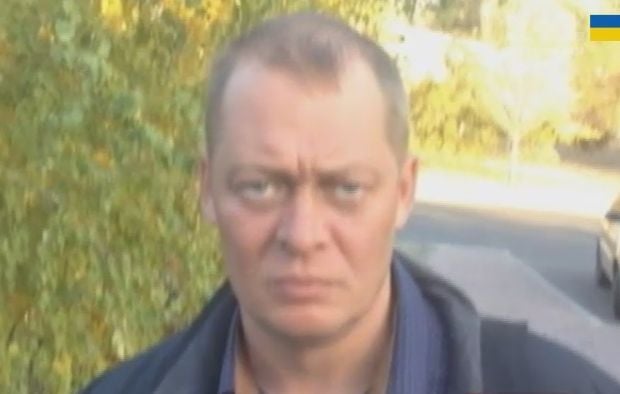 A TSN journalist once heard an OSCE SMM monitor who later introduced himself as Maksim Udovichenko promoting Russian propaganda among locals in Luhansk region while being not on OSCE monitoring duty. "Don't worry. We'll fight in Syria for a while and come back here," he told the locals.

When caught on camera, he immediately changed his rhetoric, saying that he loved Ukraine, but later he tried to intimidate the journalists who were shooting him.

Half an hour later, his boss dismissed him allegedly for a drinking problem.

To cover up the scandal, his colleagues from other countries were even trying to hide the Russian monitor in a hotel room, and the senior officials from the OSCE's Luhansk branch called guards to keep the TSN journalists away.

"It would be unfair if an incident with one person cast a shadow on 590 international observers," Spokesperson for the OSCE SMM to Ukraine Michael Bociurkiw told TSN.

Following an incident involving a monitor in Severodonetsk last week of highly-inappropriate behaviour the OSCE Special...

The TSN journalists asked both the OSCE's Kyiv and Vienna offices why the OSCE was so concerned about the behavior of its monitors rather than about their past, but the organization's officials assured the monitoring groups in Donbas have only 32 Russian citizens, and all of them are professionals.

Meanwhile, the journalists managed to catch the "professional" packing his suitcase, and his frankness was striking.

"My name is Maksim Udovichenko, and I'm indeed an OSCE monitor. Yes, it's true that I served in the Russian armed forces. Yes, it's true that I'm a special operations officer from the Main Intelligence Directorate. You've caught the wrong fish. I am a GRU officer. They have now called me back, they know who I am," the man on video said.

Udovichenko confessed it wasn't difficult for him to join the international mission. Neither the Ukrainian Interior Ministry nor the Security Service of Ukraine uncovered him as an infiltrator.

"I got registered through the Foreign Ministry, was interviewed, coped with the document work," the man said.

He also claims that the Russian occupation army has left eastern Ukraine, focusing on the war in Syria. "The entire 'armada' has gone. We all have gone to Syria. You guys are now on your own with them [militants from the self-proclaimed Donetsk People's Republic and Luhansk People's Republic]," Udovichenko said.

In his words, no one is making the Russian army go to fight in Ukraine. "Nobody is forcing us. Those were dumb swaddies who had been fighting," he added.

It also turned out that during his mission as an OSCE monitor, Udovichenko had become a "star" in Sievierodonetsk's taverns. Waiters would tell the journalists that in the midst of war monitors would get into a drunken brawl in a restaurant, and they could be calmed down only with a picture of former Luhansk Governor Hennadiy Moskal. "When Moskal was governor, he wrote on the web that they [OSCE monitors] were sitting here, dining, and doing nothing else. We then showed his picture to them, trying to make them behave," a waiter said.