Ukraine has slammed the statement as "unacceptable". 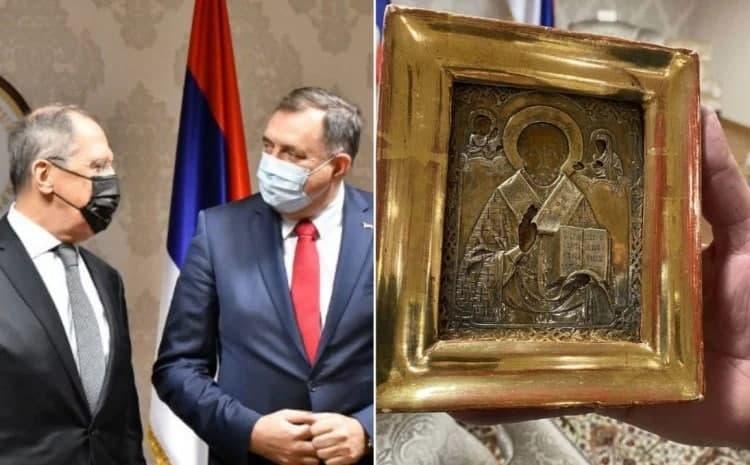 The Serb member of the Presidency of Bosnia and Herzegovina, Milorad Dodik, says he will transfer to Ukraine a centuries-old Orthodox icon, which had earlier been handed as a gift to Russia's Foreign Minister Sergei Lavrov on condition that Kyiv proves it has actually been searching for it earlier.

That's according to the Ukrainian media outlet European Pravda, referring to Radio Slobodna Evropa on January 15.

In particular, Dodik said he had not heard back from the Ukrainian side as to whether they were searching for the icon, and no data related to it was allegedly provided whatsoever.

"If Ukraine proves that it asked for the icon before the date when I had a meeting with the Minister of Foreign Affairs of Russia, Sergey Lavrov, I will accept to hand it over," he said, as per Sarajevo Times.

Read alsoUkraine demands from Bosnia return of relic icon – FM KulebaDodik mentioned the icon as he was addressing the situation in Bosnia's judicial system, which he called "catastrophic."

"An example of this is the icon, which has been the subject of a wide debate lately, although Ukraine hasn't been looking for it. There is a statement by the Directorate for Coordination of Police Bodies of Bosnia and Herzegovina, which is responsible for cooperation with Interpol, that the latter has no information about the icon being sought," he said.

Commenting to UNIAN on the said statement, Press Secretary of the Ministry for Foreign Affairs of Ukraine Oleh Nikolenko said: "Ukraine does not accept the language of conditions and ultimatums from a member of the Presidium of Bosnia and Herzegovina, Milorad Dodik. The fact that the icon comes from Ukrainian territory is indisputable. The Office of the Prosecutor General f Ukraine has launched criminal proceedings into its illegal export. We expect that the Bosnia and Herzegovina's side will not use the icon in the internal political fighting, but provide assistance within the framework of a criminal investigation and examination and in its early return to Ukraine as soon as possible," Nikolenko said.

The spokesman noted that "Ukraine and Bosnia and Herzegovina are parties to the 1970 Convention on Measures Aimed at Prohibiting and Preventing the Illicit Import, Export and Transfer of Ownership of Cultural Property."

"According to Article 7, the parties to this convention undertake to prohibit the import of cultural property stolen from a museum or religious and secular historical monument, as well as at the request of another participating state to take appropriate steps to identify and return any such cultural property," Nikolenko said.

Subsequently, the Russian foreign ministry announced that they would return the icon to the side that had presented it so that its history could be traced through Interpol.

According to local media reports, the icon is almost 300 years old and was stored in the Ukrainian city of Luhansk, which is now occupied by Russian-controlled forces.

Read alsoUkrainian icon presented to Lavrov in Bosnia estimated at EUR 12.5 mlnThe Ukrainian Ministry of Culture and Information Policy intends to appeal to law enforcement agencies with a request to establish a chain of the icon's movement from Ukraine to Bosnia and Herzegovina.