The sailors were released in late January, thanks to the joint efforts of Ukrainian diplomats and intelligence operatives. 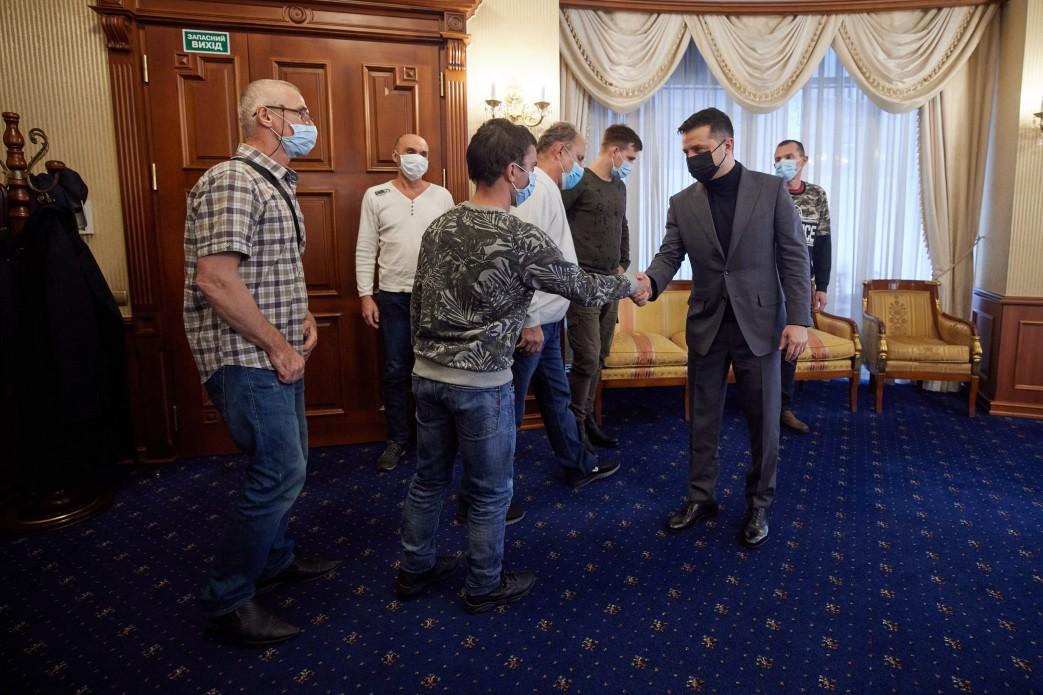 Ukrainian President Volodymyr Zelensky met in Kyiv six Ukrainian crew members of the Stevia vessel, who had been recently released from pirate captivity after being abducted in the Gulf of Guinea in December 2020, according to the President's Office.

In pursuance of the President's order, the Ministry of Foreign Affairs ensured the release of sailors from pirate captivity. The negotiation process was ensured between the shipowner and the kidnappers. The Ukrainians were released late January 2021. They were first taken to Port Harcourt, where they underwent physicals, and then – to Lagos and Istanbul (Turkey). Today they arrived in Kyiv, the report reads.

"We have received information about the capture. We started working via the Ministry of Foreign Affairs. The kidnappers wanted a lot. But our diplomats did a great job – both the Foreign Ministry and our intelligence operatives. A rather complex combination has been carried out. People were returned. The operation went brilliantly, because all people are safe and sound. We know of cases where this could take years. I think this is a great win for Ukraine. We get everyone back," the head of state said, welcoming the sailors home.

Read alsoZelensky: Work on freeing Ukrainians from captivity underwayThe president stressed that the return of Ukrainian citizens is a priority for the Ukrainian state, noting high quality of the operation to ensure the release of captured sailors.

"I express gratitude to the minister for foreign affairs, chair of the intelligence committee, head of the President's Office, and all diplomats who have worked in Ukraine and beyond. Plenty has been done by our embassy in Nigeria, and we have also cooperated with Albanian diplomats," he said.

Zelensky also inquired, where the pirates had been holding the Ukrainians.

Sailors said they were held in the jungle among mangrove forests, suffering from mosquito swarms.

"It was horrifying. There were 20 people around us at all times, wielding rifles," one of the sailors said, adding that most of the kidnappers had always been severely intoxicated.

"Everyone is back, everyone is alive and well. We congratulate you. People are a priority. Therefore - with the return!" the head of state replied.

The president also offered that the released men undergo physicals and rehabilitation at the government-run Feofania Hospital in Kyiv.

"I'm glad that finally, our sailors are back in their homeland, embracing their families. After months of painstaking work by diplomats and all parties involved, we've been able to ensure their release from pirate captivity. Whatever trouble Ukrainian citizens abroad get into, they can count on protection of the Ukrainian government. It has always been and always will be the case. Ukraine doesn't leave its people to their own devices," said Ukrainian Foreign Minister Dmytro Kuleba.

The President's Office also said that last year, thanks to the efforts of Ukrainian diplomats, 42 Ukrainians held on foreign soil were successfully released, including 17 Ukrainian sailors captured in the Gulf of Guinea, 14 crew members of the Ruta vessel, who had been held in Libya since 2017, nine Ukrainian citizens from Syrian refugee camps, and two citizens held hostage in Iraqi Kurdistan. Also, in early January 2021, four citizens – crew members of Captain Khayyam vessel, sentenced in Libya in December 2017 to five years in prison, were released and repatriated.

On December 16, 2020, pirates attacked a STEVIA dry cargo carrier and captured eight crew members, including 6 Ukrainian citizens, in the Gulf of Guinea off the Nigeria coast.

The vessel is owned by an Albanian company.