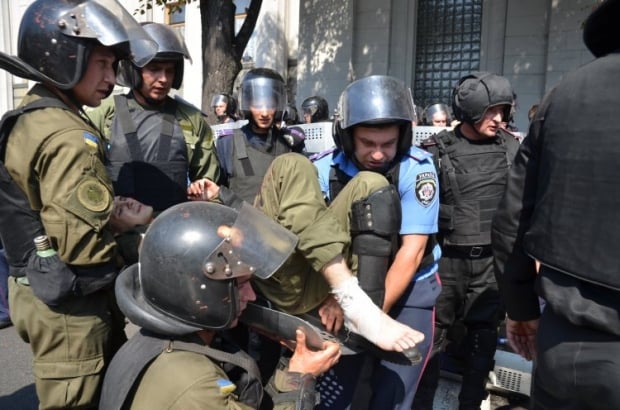 "Another soldier of the National Guard, Dmytro Slastykov, a conscript from the town of Zhovti Vody, died in the hospital from injuries after yesterday's grenade blast," Avakov tweeted.

"A guy from Kherson region, born in 1995, suffered shrapnel wound to the brain, incompatible with life. Sincere condolences to his family," Olha Bohomolets, the president's adviser on humanitarian issues, wrote on Facebook.

As UNIAN reported earlier, the National Guard of Ukraine reported that National Guard soldier, Private First Class Ihor Debrin, born in 1990, died of a shrapnel wound in clashes when guarding the parliament's building in Kyiv on August 31, 2015. A resident of the city of Kherson, he was drafted into the National Guard in April 2015.

Ukrainian Interior Minister Arsen Avakov claims that a detained Sich battalion fighter participating in the Anti-Terrorist Operation in Donbas, who is now on leave in Kyiv, has confessed that he had thrown a grenade during clashes outside the Verkhovna Rada building in Kyiv between law enforcement units and protesters who are against decentralization-related amendments to the Constitution.