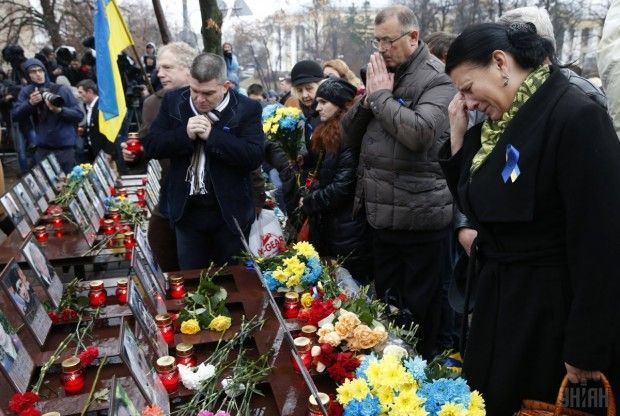 Hrytsak and Shokin said that these had been the weapons used to kill the Heavenly Hundred Heroes.

Hrytsak in particular said that his service had conducted a number of searches and investigations into events related to the Revolution of Dignity of 2013-2014 and found fragments of 23 guns used against Maidan activists. The weapons were mechanically damaged, ID numbers were filed off. Twelve out of the 23 pieces of the weapons were identified during tests.

"With a high degree of probability we can say that these are fragments of 22 Kalashnikov rifles, one Kalashnikov machine gun and one 12 gauge smooth bore barrel," Hrytsak said.

Respective materials were submitted to the Prosecutor General's Office and the Interior Ministry.

"The investigators have proven completely and beyond controversy that the weapons were used to kill Maidan activists," Shokin confirmed.

He promised to elaborate shortly after on details, including what cases the guns had been used in.

The president in turn emphasized that all those guilty of the execution of Maidan activists had to be brought to justice, inter alia, those who gave the criminal orders. This information "increases the evidence base substantially and helps bring to justice not only those who killed Ukrainian heroes, but also those who ordered the murders and supplied the weapons," he said.

The president also announced he would demand that parliament introduce amendments to the law on trial in absentia at the coming parliamentary session.